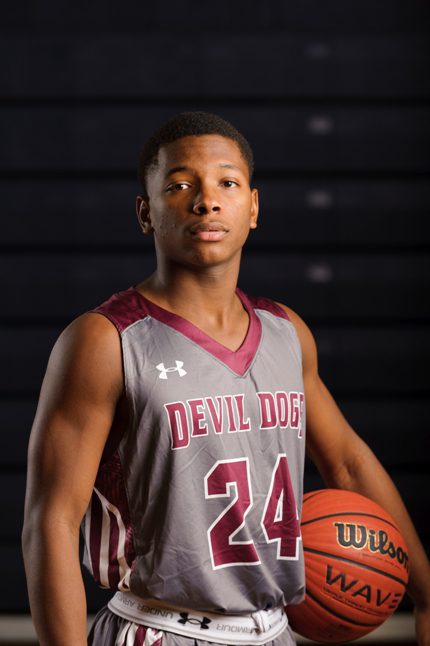 
With just five games remaining on its schedule, Morrilton (14-9-1, 8-1) sits atop the 5A West conference. With their goal of a conference championship nearly complete, the Devil Dogs will soon be turning their focus to the next big task — winning the Class 5A state championship.


“Our coach thinks that we can go all the way,” senior guard Chave Zackery said. “We all do. We started out slow early this season, but once conference got started, it was a different story. We don’t feel like we can lose right now. If we can continue playing the way we play now as a team — doing simple stuff like scoring, defense, rebounds, taking care of the ball and making shots — then I think we can go all the way.”


Zackery was selected to this year’s 501 Basketball Team — 35 players representing the best the 501 has to offer both on and off the court. He was nominated by his head coach and father, Keith Zackery.


“Chave is a fearless competitor who plays the game the right way,” Keith Zackery wrote in his nomination. “He can score in a variety of ways and is a great defender. He’s a good teammate because of his unselfishness on the court. He competes at a high level, which is contagious to teammates.”


Zackery got his basketball start at a young age, with a little inspiration from his father.


“I’ve been playing since the fourth grade,” Zackery said. “I grew up watching my dad play. He was a really good player and I’ve always wanted to model my game after him. He has taught me how to create space for my own shots and also how to get around defenders and get to the rim.”


In his final season with Morrilton, Zackery says that with each game, the Devil Dogs’ confidence has only grown.


“There have been many great games for us this year,” Zackery said. “Near the beginning of the season, we played well as a team to beat Fort Smith Southside. Later, we downed Little Rock Christian in double overtime by four points. That night, we had four or five players score in double digits. Last week, we beat Greenbrier by one point. We’re playing really good basketball right now and I’m excited for whatever comes next.”


Riding a five-game winning streak, the Devil Dogs face a tough challenge this week in the Maumelle Hornets. According to Zackery, the matchup is a must-see game.


“I’m excited to play against an old AAU teammate in De’Shawn Williams,” Zackery wrote. “He’s a good player who can shoot from anywhere on the court. As a team, we have to do what we did last time to stop them. The last time we played, I let my emotions get the best of me, and I was kicked out of the game during the second half. Even though we won the game, my team needs me to finish this time.”


On a personal level, Zackery accomplished an unlikely feat on the court this year.


“This year, I did something I didn’t think I was capable of,” Zackery said. “Vilonia has a 6-foot-9 player and I blocked one of his shots. He caught a pass, took the dribble and went up for the shot and the ball went right into my hands. It was big for us because we were down and needed a stop. I felt 10 feet tall. The crowd went crazy for me and it felt great. It gave us the momentum we needed to come back for a win.”


Off the court, Zackery plans to participate in Devil Dog baseball and soccer this year. The senior also recently won a prestigious academic award.


“This year, I was awarded Outstanding Senior of the Year,” Zackery said. “It recognizes good grades, being respectful and helping others. I go around the school and help teachers and other kids when they need help. It was a really cool honor.”


“Chave is a very polite young man,” Keith Zackery wrote. “He treats people the right way and is always willing to help others. He has a nice balance between family, school and friends, and prioritizes his time well.”


When he’s not focused on academics and athletics, Zackery shares a hobby that he’s extremely passionate about — taking care of his canine companions.


“When I’m not doing homework or practicing basketball, I’m training, running and exercising dogs around the track,” Zackery said. “I’ve grown up around dogs all my life. My dad always told me to learn how to love them and care for them and that’s what I do. I have three pit bulls — Mason, Sahara and Cali — and I treat them like they’re my own kids.”


Zackery’s love for dogs extends past his own — the senior can often be found volunteering at his local animal shelter.


“In my free time, I help out at the Morrilton Animal Shelter,” Zackery said. “There’s a lot to do there. I help care for the dogs, bathe them, clean their pens and walk them. I feel like I help make a difference there.”


After high school, the senior plans to take his love of dogs and basketball to the next level.


“This season, I’ve been working hard to get a basketball scholarship,” Zackery said. “I’ve drawn interest from Delta State University and I talk to them every day. If everything works out for me there, I’d want to major in general business administration so that I can learn how to start and run my own business with dogs one day.”