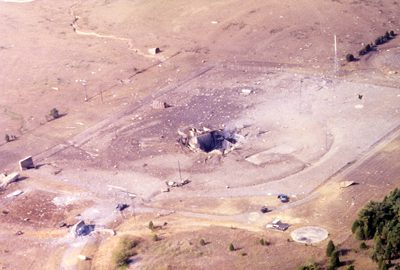 Anglin wasn’t the only one who thought the world as he knew it was over just after 3:03 a.m. that day.

Sid King, who still owns radio station KGFL in Clinton, called it “the hugest explosion I’ve ever heard in my whole life.”

“I was slipping my shoes on and off, and when it blew it blew my shoes off and I grabbed my shoes, ran and jumped behind the county sheriff’s car,” he said. “Tom (Phillips of the radio station) and I were crouching down, and all this particle stuff started falling out of the air. Right in my face were the backup lights on the sheriff’s car. He didn’t know we were crouched behind him, and when he started to back out, we had to jump out of the way real fast.

“(Later), people in Clinton really got a joke out of teasing me. I thought for a while I was outrunning a nuclear blast in my Dodge Omni. I floored it all the way to Clinton.”
Ultimately, one Air Force sergeant died, 21 other maintenance workers were injured and more than 1,400 people were evacuated from their homes in Van Buren, Faulkner and Conway counties for 12 hours before it was determined that none of the nuclear material had escaped from the missile, located at Complex 374-7.

According to encyclopediaofarkansas.net, the Titan II program was part of the second generation of intercontinental ballistic missiles that could be launched from within their silos in less than a minute.

The Arkansas Gazette reported on Sept. 19, 1980 — after a fuel leak began the crisis but before the explosion — the Titan II missile to be “an intercontinental ballistic missile that is 103 feet high and 10 feet in diameter. It is a weapon that can deliver a nuclear warhead anywhere in the world.”

According to the Gazette, a series of shock waves, much like an earthquake, followed the initial flash, “followed by a burst of acrid-smelling reddish-orange smoke and flame. Light debris, like pea gravel, fell like rain over the area.”

King compared the view of the explosion to television footage of the use of napalm during the Vietnam War.

The newspaper called the 10-megaton warhead “the most powerful in the United States arsenal.” The warhead was thrown from the silo after the blast shattered the silo’s 750-ton steel and concrete lid.

Monty Rowell was a college graduate of six weeks working for radio station KCON in Conway that day.

“The ground shook and the sky lit up like an early morning sunrise,” he said. “I ran to jump in the ditch across Highway 65 thinking, ‘This is it. We’re all dead.’ There were chunks of concrete blown out of the ground that were twice the size of the (University of Central Arkansas) student center. I watched the cloud plume going north.”
King made it to the Clinton radio station in his Omni and continued reporting the story. Although the station was licensed as a daytime-only AM outlet, it was back on the air by 3:20 or so.

“Probably within 45 minutes to an hour, our radio station was so full of people standing around wanting information,” he remembered. “We were packed. Downtown Clinton at 4 that morning had more people than you could imagine.

“People were heading to Branson and Harrison to get away from this. We had people calling from all over the U.S. It’s such a nightmare and a blur, we had so many people in the radio station, and I’m not sure this happened, but I still think that somebody said the Russian Embassy called here wanting to know what happened.

“The Air Force would not tell you nothing. They were kind of shocked too, but we’d say, ‘Is there nuclear matter out there? Is it radioactive?’ We knew it wasn’t a nuclear explosion, but it had thrown that stuff all up in the air, and they would not tell you.”

The Air Force’s official response was it would neither confirm nor deny reports that a nuclear warhead was blown out of the underground site in the explosion.

But King said radio station employees picked up talk on police scanners that officials were looking for the warhead. He said it was ultimately found lying in a ditch.

He said in subsequent days, an Air Force official, “trying to make up with us,” gave media members a tour of the silo.

“He told us the doors, which weighed like 600 tons, blew off, and he said they blew over their truck and landed on the other side. Had they landed on them, they would’ve never known they were there. The fire was so great it burned the paint completely off (the Air Force) truck.”

The damaged warhead, “all beat to hell,” was covered with tarps. Inspectors came in to make sure it could be moved without causing an explosion.

“They would make a big production out of sending cars out real fast with lights going and a tractor/trailer so you thought it was gone,” King said. “They did a couple of those to throw you off so that you didn’t really know when they were moving it.”

Rowell, though, said a lot of people believed the warhead left that night by helicopter.

“The word was that they were putting it on this flatbed truck a few days later, but I never bought that,” he said. “The Air Force’s reputation was pretty shot because of the (earlier) leaks.”

According to the Encyclopedia of Arkansas, on Jan. 27, 1978, an oxidizer leak sent a cloud of toxic fumes drifting across Highway 65. Civilians were evacuated from the area, and several people experienced “ill effects from contact with the vapors.” The Gazette reported Anglin was one of them.
The 1980 leak was determined to have been caused the evening of Sept. 18 when an airman conducting maintenance on the missile dropped a wrench socket, which then punctured a fuel tank.

“The guy would not say exactly what happened to cause the leak,” Rowell said. “He wouldn’t come out and say the wrench. Carol said, ‘Sir, did he drop the wrench?’

“She wouldn’t take no for an answer. She nailed that colonel to the wall.”

“He answered every news media question known to mankind, and the Air Force kept him so far in the dark,” he said. “I always felt sorry for him because he was trying to be upfront and shoot straight.”

Anglin remembered getting no cooperation from government officials even before the explosion.

“The Pentagon called and said don’t get anybody excited,” he said. “Hell, everybody’s already excited. They told me every 30 minutes, ‘We’re taking the pressure off.

Everything’s going to be all right. But we’d had leaks where they’d lied to me before, so I didn’t believe anything.”

When Air Force officials asked him to evacuate an area, he evacuated farther.

“I lost a lot of confidence in the head people, not the regular guys,” he said. “The big shots didn’t want nobody to get excited. But it could’ve been terrible. (Bill) Clinton was governor, and they got him on a plane and got him out of there. All the important people, they made sure they were out, but they kept telling us it was no problem.”

Sometime during the incident, he was a few miles away at Bee Branch working the evacuation.

“This soldier stopped me and said there was no problem now,” Anglin remembered. “He had one of these masks on. I said, ‘Can we get a mask?’ and he said, ‘You don’t need them.’ I said, ‘Well, give me yours,’ but he wouldn’t.

“There were a lot of things like that. They thought we were country boys and didn’t know any better.”

In the aftermath, Anglin was featured in Star Magazine as a local hero.

Complex 374-7 was destroyed after the accident. A little more than a year later, the Reagan administration announced plans to retire the Titan II program, citing concerns about safety, cost efficiency and an evolving nuclear strategy.

The Air Force had 54 Titan II silos — 18 each in Arizona, Kansas and Arkansas.

On Aug. 9, 1965, an accidental fire claimed the lives of 53 civilian workers near Searcy while they were converting a Titan I silo to accommodate a Titan II missile.

Attorneys for the families of the 53 workers negotiated a settlement of $4 million.