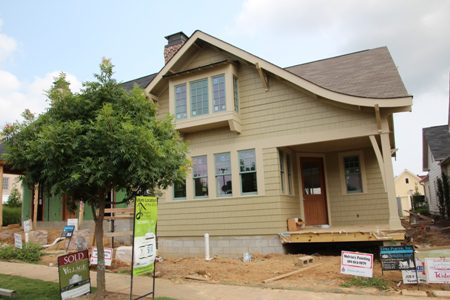 The designer house will open Friday, Oct. 17, and run through Saturday, Oct. 25, at 1120 Reynolds Ave. at The Village at Hendrix. Luke Porter is the builder for the home. Organizers are selling grand tour tickets for $100 each, which includes a special invitation to the preview event, designer house run of show, a design class, a culinary class and two tickets to the grand finale.


The classes will be held at The Village Welcome Center. Space is limited, and the classes are filling up. (Schedule subject to change.)


To purchase Grand Tour tickets, visit conwaysymphony.org or stop by The Village Welcome Center at 1040 Reynolds or 501 LIFE, 701 Chestnut St. in Downtown Conway.


The design class schedule, underwritten by A Southern Tradition:

Chris will show participants how to mix what they already have in new ways and bring in only a few choice new elements, so as not to break the decorating bank.


Dusty and forgotten pieces can be turned into charming and engaging personal statements through the use of “jhemajang.” That is Chris’s trademarked verb that means “the mixing up and arranging of different elements, both garden and unrelated, old and new, in a funky way that brings the pieces together in a whole new light.”


Chris will demonstrate several possibilities and many combinations that will provide the impetus and encouragement to beautify home and landscape.


An award-winning landscape architect, Chris is known for his risk-taking designs that incorporate the unexpected and unusual, as he has created some of the most recognized designs and locations in the state. He has nearly 30 years of experience in landscape and interior design, attended Oxford University and has his bachelor of arts degree from the University of San Diego. He’s the author of “Five Seasons: Unique and Stylish Ideas for Your Home and Garden” as well as numerous blogs on landscape design and seasonal projects. His television segments, “Today’s Home: Living the Good Life with Chris H. Olsen” is currently seen in more than 33 states.


Chris resides in Little Rock, where he maintains a garden boutique and nursery, Botanica Gardens and is spokesman for the Little Rock Visitors Bureau. He is an active participant in numerous charities and a contributor to numerous lifestyle publications.

Jessica is the owner of A Southern Tradition in Downtown Conway. Her work has been featured in national and regional magazines.


A graduate of the University of Arkansas art program, she’s an avid blogger, lover of travel and has a passion for all things creative. She lives in Conway with her husband, Brian, and daughter, Stella. For more, follow her blog at asoutherntradition.com/blog.

Starting in the hospitality industry 30 years ago was never a dream for Rick Oberdolhoff, but a way to put himself through school. Born on a cattle ranch in central Missouri, Rick has traveled the United States gaining many lifetime experiences and now calls Little Rock home. While living in Houston, Texas, for 15 years, Rick had the opportunity to produce many unique events, some of which included a state dinner for President George W. Bush and the Crown Prince of Saudi Arabia, creating and designing lunch menus and décor for the judges of American Idol along with executing an anniversary event for Virgin Airlines in which Richard Branson would be in attendance.


Later in his career, Rick was asked to move to a private island in the middle of the Pacific Ocean as event director for the Four Seasons Resort. Rick’s creative skills were put to the test as he produced events all over the island for sports figures and celebrities.


Currently, Rick serves as the director of special events for the Little Rock Club, located high above the city on the 30th floor of the Regions Financial Center in Downtown Little Rock.

Crush Wine Bar is located in the Argenta district at 318 Main St. in North Little Rock.


Wine bars can be stuffy and annoying, but Crush is neither. The décor isn’t attention grabbing, but everything is comfortable. It’s classy and low-lit, so it makes a great date spot, but it’s also casual and comfortable enough for an evening drink with friends.

Like most, Josh is a self-taught cook. Growing up, he helped his mom and dad at every opportunity he was given. During college, Josh began working at Williams-Sonoma because of the high-quality products and commitment to elevating the home cook.


As a trained teacher and someone who enjoys helping others learn, he jumped into an instructor role for the Williams-Sonoma technique classes. Being able to teach and learn has always been a valuable and rewarding experience for Josh.

Anthony is owner/operator of the Cross Eyed Pig BBQ restaurant in Little Rock and has dabbled in the kitchen since high school. A native of Newport and graduate of Hendrix College, he spent many hours preparing holiday meals at home. In 1991 he competed with a barbecue team across Arkansas and eventually made his way to Memphis in May.


Anthony’s strongest influences in cooking and barbecue have been credited to his dad and “the Shack” restaurant he frequented as a kid. The Pig prides itself on keeping it simple and serving up the best “old school” barbecue possible.

Born in New York City, Zara Abbasi comes from a family of creative people. After college, Zara attended law school to pursue a career as an attorney although she was told many times she should attend culinary school. After law school, Zara began selling cakes privately and eventually landed a job as the head pastry chef at Natchez.


Zara’s family owned a restaurant serving Pakistani food for a couple of years where she learned how to be a better cook and pastry chef, but more importantly, fueled her involvement in the food industry.


Working at Natchez has allowed Zara to flex her creative muscles and work within seasonal guidelines, which she loves.