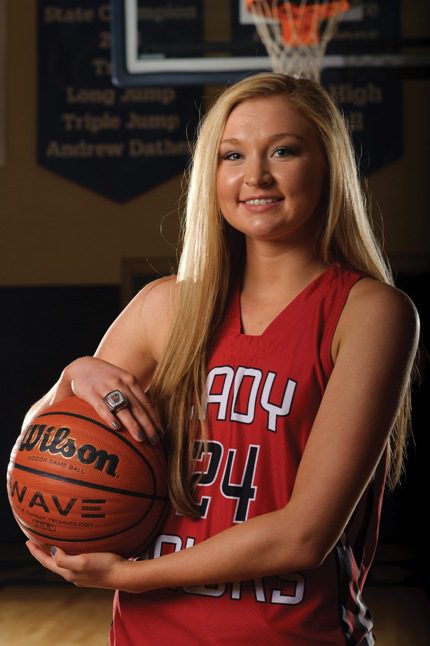 Through hard work and phenomenal effort, the Red Hawks finished the season with a 32-6 record and captured their first state championship in school history. In addition to the excitement of reaching the pinnacle of high school basketball, however, the victory was bittersweet for senior post player Kassidy Thompson.


“Last season, one of our classmates passed away,” Thompson said. “His name was Cameron Chancellor, and he was our team captain’s boyfriend. Losing a classmate was really hard on all of us, but it also brought us closer as a team. When we won the championship, I remember our school storming the floor. Though we won as a team, we really felt like we did it for him.”


Thompson was selected to this year’s 501 Basketball Team — 24 players representing the best the 501 has to offer both on and off the court. Thompson was nominated by Nemo Vista’s head coach, Kyle Payne.


“Kassidy is normally one of the first players in the gym and one of the last players to leave,” Payne said. “She runs the floor well and has the ability to step outside and hit 3-pointers as well. She never questions other teammates, coaches or officials. She puts all of her effort into working hard for the team’s success. She is a picture-perfect leader.”


Following last year’s championship run, Thompson and the Red Hawks are optimistic about what the team can accomplish in 2015. As the team’s lone senior, Payne believes Thompson can only get better.


“I expect big things from Kassidy this year,” Payne said. “She has put in an enormous amount of extra time and hard work in the gym and weight room. I’m expecting Kassidy to be more assertive this year as the lone senior on the team and to help lead this team back to the state tournament this spring.”


When she’s not leading the team on the court, Thompson spends her free time volunteering for the youth Pee Wee programs at Nemo Vista and giving back to the community she calls home.


“Kassidy has volunteered her time on numerous Saturdays to help with our youth Pee Wee program games by either keeping the clock or working in the concession stand,” Payne said. “Kassidy is also part of the St. Joseph Catholic Church in Center Ridge and volunteers her time there working dinners and other events. Kassidy has also volunteered time working with youth players during summer camps.”


“Both of my parents are retired basketball coaches,” Thompson said. “They’re always offering advice on how I can get better. They correct me if I do something wrong. They’re my role models.”


In addition to her active leadership in Beta Club, FFA, FCCLA and FBLA, Thompson, who maintains a 4.0 GPA, also works with her fellow classmates by peer tutoring them during her extra time.


“Kassidy is a great role model for the younger students at Nemo Vista,” Payne said. “She is easy to talk to and get along with. She is fun to be around and has many friends. Kassidy is always making the right decisions and is never in trouble. Kassidy plans on attending either UCA or Hendrix in Conway with a focus on Pre-Pharmacy, and she also has interest from Hendrix’s basketball coach to continue her basketball career, if she chooses.”