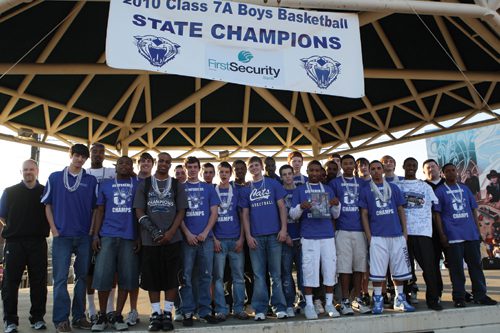 It was a relief for Purifoy, along with classmate Kenyon McNeaill, who both fell short in the state finals as sophomores.

As juniors, the talented duo was dropped in the state semifinals.

“It just felt really good to get the gorilla off our back,” Purifoy said. “I feel like there was pressure on all the players to finally get it done. We’ve wanted to do it since our sophomore year. To get to our senior year not having a championship, it felt like we had let Conway down.”

Talent pervaded the Wampus Cats this season, but Purifoy was the key – particularly in the playoffs.

“In the second half, we scored 22 points, and Purifoy had 20 of them. The game went to overtime, and we told him that he had to get us to the championship game. We made sure he got touches in the middle of the floor. He was the start of our offense and more often than not he was also the finish.”

Purifoy scored five of Conway’s seven points in overtime against Central, putting the Wampus Cats into the state finals.

“I knew when McNeaill went down that I had to step up,” Purifoy said. “Everybody had to step up their game, but I knew I had to carry the load as a senior. I knew it was on me to carry us to the championship, and that’s what I tried to do.”
Purifoy had 25 points in the state championship game. At 6 foot 5 and 210 pounds, he was hard to stop offensively on the high school level.

“Watching the film back, four of Fayetteville’s starters tried to guard him at some point,” Bates said. “There was not one guy that could stop him. That’s been our luxury for three years. He’s a tough guy to match up with.”

But it’s not just the offense.

“He’s an excellent defender, too,” Bates said. “When we played at Van Buren this year, the Pointers’ 6-foot-11 Hooper Vint had 19 points after the third quarter. We put Preston on him in the fourth quarter, and he didn’t score again. Defense is a part of his game that has gotten better over the last three years.”

Jeff Matthews, who does play by play for the Wampus Cats for Conway Corp., is impressed with another area of Purifoy’s game. “I think he’s turned into a better perimeter player,” Matthews said. “He’s always been one of the biggest kids on the court, and his inside game has always been strong. As he’s gotten older, though, his perimeter play has improved.

He’s gone from being a guy that could probably only play the four position to someone who could probably now play a point guard role. That’s a nice luxury with a guy with his size.”

Bates says he thinks Purifoy’s perimeter game will be the key as he moves on to the University of Alabama at Birmingham. “I assume he’ll be a perimeter defender in college,” Bates said. “He’s long enough and quick enough to do that. He’s a very coachable kid. Whatever the UAB coaches want him to do, he will do. He will accept whatever role they want from him.”

Purifoy was named the Arkansas Gatorade Player of the Year and the Downtown Tip-Off Club’s co-player of the year. He was also named to the 7A All State basketball team along with teammates McNeaill and Delph.

“It feels great to be a part of Conway history,” Purifoy said. “People are always talking about the championship from 30 years ago. Now our team is going down in history, and it will be remembered for years. Hopefully 30 years from now people will still be talking about our team.”