Story and photos
by Callie Sterling


Conway resident Ray Smith made the switch from a longtime hobby of plastic modeling to card modeling 15 years ago and hasn’t looked back.

Smith was a plastic modeler for approximately 35 years.

“I have been paper modeling, which is layman’s terms for card modeling, for 15 years,” Smith said. “I started paper modeling after spending a year in Korea. Before that, I did plastic modeling for about 30 or 35 years.”


Smith is retired from the military. He found that modeling is the perfect compact hobby that he could easily transport during deployments.


“I was gone with the military quite often and I couldn’t pack up big items, like big tools or an air compressor,” Smith said. “Modeling materials were compact and easy to transport. I could pack my entire kit and modeling tools in a small pencil box and didn’t have to worry about it.”


Smith saw an advertisement for paper modeling and that sparked his interest. He eventually officially made the switch from plastic to paper.


“I saw an ad in a magazine for paper modeling and thought I would try it,” Smith said. “I started to do paper modeling more and more and eventually quit the plastic and did exclusively paper.”


Although modest about his skills, Smith has become extremely savvy in paper modeling. Winning awards and competing in nationwide competitions, Smith is well-rounded in his craft. 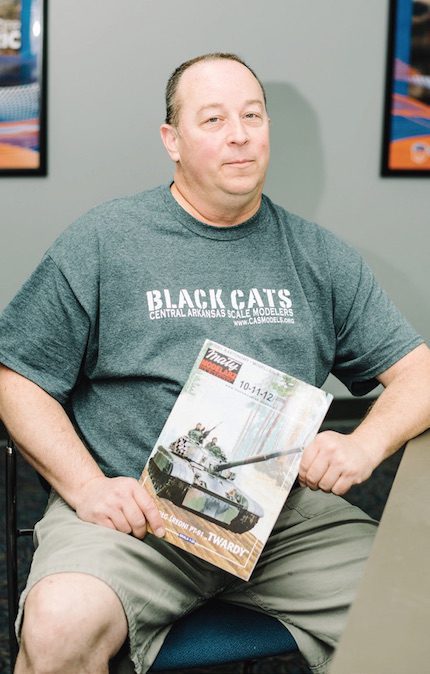 “I have met other paper modelers through online forums and websites,” Smith said. “I try and find contests in their area so I can meet them in person during the competitions.”


Smith typically attends approximately four competitions a year. In 2015, he will attend seven.


“On average, I usually attend four competitions, but this year I am attending a few more than I usually do,” Smith said.


Smith finds that attending competitions helps him improve his skill set as a paper modeler.


“There is a great comradery at paper modeler competitions,” he said. “By attending competitions, everyone gets better. We all have the same competitive spirit. It gives us a chance to talk about how we did something and share our knowledge with one another.”


Locally, Smith devotes his time to a modelers club, the Central Arkansas Scale Modelers. The club is geared toward any type of modeling. Smith is the only paper modeler and serves at the club’s president.


“I have been president of CASM since this past October,” Smith said. “It is open to any type of modeler. We have modelers that specifically make wooden models. I am the only paper modeler, which is the cool thing about the club. We aren’t specific to a certain medium.”


CASM has members of all ages and consists of females and males.


“Our youngest member is around 11 and our oldest is up to 80,” Smith said. “We have a husband and wife in the club as well.”


To become a member of CASM, contact Smith at [email protected] Interested modelers can learn more about CASM at casmodels.org.

The supplies needed for paper modeling are easy to obtain and compact.


“You can buy a paper modeling book or you can print model designs online,” Smith said. “The great thing about paper modeling is if you mess up, you can just print that part out again and start over. Paper modelers need white glue, just the normal kind. It doesn’t have to be fancy. I usually personally don’t use Elmer’s because it is too watery, but some modelers do. Felt pens are nice for white edges.”


Smith recommends modeling to anyone, as it is not a physically demanding hobby.


“Modeling is a relaxing hobby,” Smith said. “It is nice and quiet, a solitary hobby. It can be a great hobby for someone with a bad knee or bad back or any physical disability.”


Smith has had several offers on his models but prefers not to sell them.


“I like to keep it just a hobby,” Smith said. “If I turn it into a job, it loses its fun. What I enjoy about modeling the most is it helps me relax.”