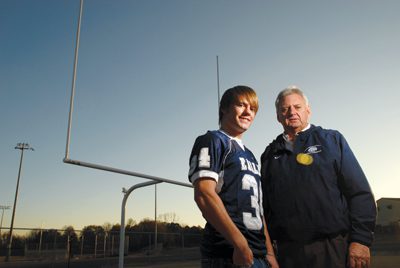 But for the last three years, they’ve been together at Conway Christian School, where Mike has served as a volunteer assistant coach to Chuck Speer and Bates was an all-state player who will be the school’s first Arkansas High School Coaches Association football all-star in June. He also earned all-conference honors for three straight years. Recently, he was named “Outstanding Player of the Year” for his high school.
Isom moved into UCA’s Admissions Department in 2000. Bates grew up to play for the Steelers in Conway Youth Football. His dad helped coach the team for a couple of years.

And when Bates decided as a sophomore to transfer from Conway Public Schools to Conway Christian School, Speer welcomed both Isoms with open arms.

“I was told that he was coming over and that he played football, so I didn’t know him, and at the time I was pretty naïve as to who his dad was. I knew he was a coach, but that’s all,” said Speer, who moved to Conway in 2003. “I heard Bates was playing guard at Conway, but when I got him out on the field, he was clearly one of the fastest kids, so we put him in a running back position.

“You always hear about dads who are coaches who want to interfere, but Mike never did that. Even when I put him on our staff to help in practice to help us sort out our defense, he never once got pushy about his son’s playing time.”

Coaching wasn’t really on Mike’s radar at the time.

“I can’t say that I really did miss it, but that kind of kept me involved in it,” he said. “I missed it more at the beginning before he got big enough to play. At Conway Christian, I just tried to help with defense more than anything.”

Mike Isom has never been one to tout himself.

“I helped them come up with a defensive scheme and helped implement that,” he said. “Probably the biggest thing I did was look at film and then try to come up with a game plan.”

After the Eagles’ season ended in the first round of the Class 2A State Playoffs in November, both Isoms declared their graduation from the sport — except for the All-Star Game, to be held in June. Coaches from the 2A-5 conference selected Bates as the league’s outstanding back. With that came the spot on the all-star roster.

After All-Star Week, Bates will move on to UCA as a creative writing major next fall. Mike will focus on his job and family.

Neither one has regrets.

“Oh yeah, it was gratifying,” Mike said of being able to coach his son.

Added Bates: “My dad did a really good job of trying to keep father and coach separate. I don’t know how, but he really did understand because it is tough to listen to your dad as a coach. My dad knows a lot of football, obviously. When we first started out, it was a little weird, but he definitely separated the two.

“It was a cool experience since he knew what I was capable of.  My dad is a great coach, and it definitely was a neat experience.”
Bates (5-7, 160) moved to fullback this year from wingback. He finished the regular season with 1,446 yards on 124 carries, ranking 13th in the state in rushing, according to the Arkansas Democrat-Gazette.

“The last couple of years, he’s been right at 1,000 yards,” Speer said. “But we moved him to fullback this year because our fullback graduated, and he took off. He finished the season with 1,653 yards rushing, and that’s with us pulling him in the second half in a lot of games.

“If we would’ve played him, who knows how many yards he would’ve ended up with? But we had other weapons so teams couldn’t concentrate on Bates alone.”

With just 22 players, the Eagles had to rely on most to play both ways, so Bates also played linebacker and cornerback.

“He’s a good player,” Mike Isom said. “He’s had a real good career there. He lacks some size, but you can’t do much about that. He’s pretty fast and he’s real quick. He plays real hard, runs hard, and he’s got the results to back it up.”

But despite his pedigree, Bates isn’t a football fanatic.

“I always wanted to be an NFL player, but I never really watched football,” he said. “Most of the time, when I was at football games, I would listen to the marching bands and stuff, but it kind of grew on me.”

He said he enjoyed his experiences in youth and middle school football.

“It was like a cool relationship with the team, a team-oriented sport, and the more I played, the more I wanted to play,” he said.

His sister, Allie, had been at Conway Christian while he was still in the Conway public schools, and he asked his parents if he could go there as well. Originally, he hadn’t planned to play football.

“My dad wanted me to go into the weight room because that would be a good way to meet people, so I went to the workouts in the summer and met the coach,” he said. “I didn’t know who he was, and I didn’t know most of the people at the school. I decided I wanted to play football, but I didn’t want to jump in. But they welcomed me in. That was cool. I went to football camp with all the players and we became really close.”

Conway Christian has been good for him academically as well. He’s a 4.0 student, and his mother, Susan, said he would enter UCA with almost enough credits to be a sophomore. He played Peter Pan in the CCS play last spring.

His mom, Susan Isom, calls herself the Eagles’ biggest fan.

“I play drums and watch the game and cheer on all of them,” she said. “Bates has been a very humble player. He doesn’t like the attention. He’s a team player.”

He leads Bible study and the youth group at the family’s church, Family Life Bible Church, where he also plays drums on the praise team. He led worship at the team’s football camp.

“He’s a committed follower of Jesus Christ,” mom said. “If there is nothing else said about him, that’s the highest quality of my child. He’s a leader on and off the field.

I’m glad Bates had a good experience at Conway Christian.”

Bates’ love for writing began in a sixth grade English class where he had an assignment to turn in a paper every week.

“Everyone was dreading that, but I took it as, ‘If I do one paper a week, why don’t I do a chapter a week and write a book?’” he remembered. “I stuck with it.”

He never considered going anywhere but UCA next year.

And although he won’t be continuing football, the sport has played a part in getting him there.

“It was a really good experience, a lot of fun, and I definitely learned a lot from the sport itself,” he said. “It’s definitely helped me pursue whatever I want to do and stick to it and be committed.

“The sport itself has been really good to me. I would definitely say I’d never regret playing the sport at all.”

Speer, too, has no regrets about his Isom experience.

“They’ve been a blessing to our program,” he said. “No. 1, Bates is an outstanding kid, a hard worker, and he never complains. He’s probably one of our toughest kids on the football team. The difference with him is when we play a tough team, a physical team, he plays harder; he runs harder. It’s in his blood from his dad. He’ll turn an ankle but he’ll keep going. I don’t know if he’s even met our trainer in three years.

“Mike taught me a ton. When I sit down to watch film, he sees things in five minutes that I don’t see watching it five times.”

And even though Bates is graduating, Speer is holding out hope of holding onto his dad.

“I go to church with Mike, and so I’m always going to slip a film in his pocket and have him look at it and let me know what he thinks,” he said. “I won’t see him quite as often, but he’s going to be one of those guys I can hit up and call if I have questions.”