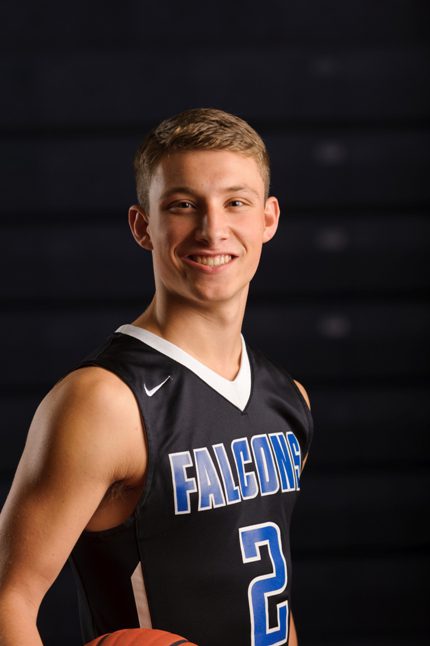 
All across the 501, high school basketball teams are gearing up for the final stretch of the regular season. In Conway, the 11-4 Faulkner County Falcons are looking to take the Arkansas Homeschool Basketball Association by storm.


“Homeschool basketball is very competitive,” Falcons senior point guard Aaron Griffin said. “There are many teams throughout the state, and they’re all good. We play in a very tough conference. Every single team in our conference can beat one another. We have to get hot and stay hot. If we do, we’re capable of big things this year.”


Griffin was selected to this year’s 501 Basketball Team — 35 players representing the best the 501 has to offer both on and off the court. He was nominated by his head coach, Dwight Balch.


“Aaron is our floor general,” Balch said. “He leads by example, is a hard worker and is unselfish. On the court, he excels in scoring, ball handling, floor leadership, hustle and competitive spirit. Off the court, his character, honesty, caring attitude and giving spirit are his best qualities.”


Griffin’s basketball leadership goes hand-in-hand with his love for the game, something the senior says he developed at a young age.


“I’ve always loved sports — basketball especially,” Griffin said. “I started playing for Upward basketball when I was in second grade. My dad was a basketball coach for 13 years. When you’ve been around the game as long as I have, you develop a knack for it.”


A true trailblazer on the floor, Griffin leads the Falcons (11-4) in nearly every offensive and defensive category this season, averaging 18 points per game, five assists per game, five rebounds per game and two steals per game. The senior is also shooting 52 percent from 3-point range — the highest on the team.


“Aaron was selected as our MVP for 2015,” Balch said. “Last season, he led the team in scoring, assists and free throw percentage and was second on the team in 3-point percentage, rebounds and deflections. I expect him to continue to lead the team on and off the court and continue to set a standard of excellence.”


“I couldn’t do what I’ve done without my team,” Griffin said. “My team puts me in positions where I can be successful. We shoot well, we’re unselfish and when our backs are against the wall, we come together and play hard to earn victories.”


Griffin’s on-the-court successes do not end there — the senior has also received multiple all-state honors and was also named to the 2015 all-region team at the National Basketball Tournament in Springfield, Mo.


On the court, Griffin draws inspiration from one of the NBA’s top leaders — Golden State Warriors point guard Stephen Curry.


“I admire players like Curry,” Griffin said. “He puts in the time, works really hard and is a genuinely good person. He doesn’t boast. He doesn’t lose his faith. He plays the game the right way and doesn’t lose himself in his fame.”


“MHEA was ranked in the top 15 schools in the country,” Griffin said. “Ranked as high as they were, we knew there would be a chance that they would overlook us. It was a close, competitive game. We came out strong, hit them hard and never stopped. As a team, we hit our shots, played great defense and didn’t make any turnovers. We scored first, held the lead the entire game and came away with a four-point underdog win.”


In his final year with the team, and a little more than a month remaining in the regular season, Griffin and the Falcons have multiple goals they are working toward.


“Every time I hit the court, I’m trying to be the best leader that I can be and I am trying to exemplify Christ in any way that I can,” Griffin said. “One of our team goals is to win a gold ball — which allows a team to play in the Gold Ball Showdown, which is the home school basketball national tournament. We need a strong finish in conference play to achieve that, and I think that it’s something that we can accomplish as a team.”


Earning the coveted gold ball won’t come without its challenges, however. Griffin sees at least two teams that could thwart the Falcons’ plans to make it to the Showdown.


“The Fort Smith Patriots are a tough team,” Griffin said. “They’re ranked in the top four, nationally, and are one of the favorites to win it all this year. We play against them twice in January. Our rivals, the Pulaski County Flames, are another good team. They beat us earlier in the year, but we get our chance at revenge against them soon. All three games will be huge for us.”


Off the court, Griffin, who maintains a 4.0 grade point average, plays striker for Falcons soccer and is active in First Baptist Church of Conway.


“Aaron serves weekly at his church,” Balch said. “He also served at multiple church camps over the summer and is also involved in local politics.”


After high school, the senior plans to attend the University of Central Arkansas in Conway and major in biology.


“I’m interested in being a military dentist,” Griffin said. “I’m excited to start a new chapter in my life, and I have decided that this will be the final year that I put on a basketball jersey. At the end of the day, I want to leave behind a legacy that’s not about basketball, but about the person that I am and about what Christ has done for others.”