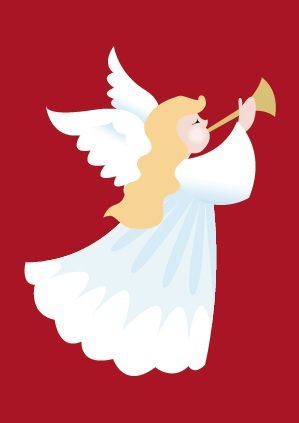 What would Christmas be without angels? Angels occupy a very prominent place in the Christmas story.

It was an angel that announced to Zacharias, the priest, that his wife would bear him a son, and “you will give him the name John” (Luke 1:13). It was an angel that gave the astonishing news to Mary that she would be the mother of Jesus, God’s Son (Luke 1:31). The sky was filled with angels heralding the birth of Christ to stunned shepherds on hills outside of Bethlehem, praising God and saying, “Glory to God in the highest, and on earth peace, good will toward men” (Luke 2:14).


The angel that appeared and spoke to Zacharias and Mary was Gabriel, God’s messenger of mercy and promise. He is the Christmas angel.


In Luke 1, Gabriel makes four amazing statements to Zacharias and Mary. Each time he shows up it is to give them “good news.” What did he say?


“I am Gabriel, who stands in the presence of God, and I have been sent to speak to you and to bring you this good news” (Luke 1:19).


Gabriel told Zacharias that his prayers had been heard and his wife would have a son, but Zacharias was having a hard time believing this great promise. Gabriel assures him that “he is God’s man, God’s messenger.” He has been sent by God to speak to him. The words he speaks are not his words, but the promises of God. He stands in the very presence of God and cannot lie.

What God speaks is truth! What He promises, He will deliver! Do you ever doubt God’s word? What He promised through His messenger, Gabriel, God fulfilled in the birth of John the Baptist. God keeps his word!


Gabriel spoke these words to both Zacharias and Mary. I have to tell you if an angel appeared visibly to me, I would faint dead away with fear! Don’t you know Zacharias and Mary thought, “What have I done?” Gabriel’s message was one of trust, not fear.


Charles Stanley, a prominent pastor in Atlanta, refers to our society as one “dominated by fear . . . not only are we fearful for our safety; but we live in dread of nuclear war, of transmitted diseases, of economic collapse. When all of these fears are combined with the always dominant worries about health, finances, death and failure, the fear factor for this generation is as great as it has ever been.” What do you fear? God’s word then and now is “do not be afraid . . . I am your refuge and strength, a helper who is always found in times of trouble” (Psalm 46:1).


The verb translated “highly favored” is only used two times in the whole New Testament. It’s used here for Mary, and in Ephesians 1:6, which says, “He (God) has made us accepted in the Beloved.” Like Mary, believers are highly favored, highly blessed. We are favored not because of who we are, but because of where we are — our position! We are “in the Beloved” in Christ! Are you accepted in the Beloved? Mary may not have felt so highly favored. She was a young girl, pregnant and unmarried. What would Joseph, her intended, say and do? What about her family? Would they all desert her? Gabriel tells Mary, “The Lord is with you.” She is not alone! And believers are never alone. Jesus is Immanuel — God with us! He will never leave us or forsake us.


Gabriel assured Mary that for her to conceive and bear the Son of God was not impossible. “With people this is impossible, but with God all things are possible” (Matthew 19:26). “Now to Him who is able to do exceeding abundantly beyond all that we ask or think, according to the power that works within us, to Him be the glory” (Ephesians 3:20-21). He is a God who is able!

A God who can! In what area of your life do you need to believe that nothing is impossible with God? That He is able? “And blessed is she (or he) who believed that there would be a fulfillment of what had been spoken to her (him) by the Lord” (Luke 1:45).


God still speaks today through Gabriel, the Christmas angel. Are you listening?