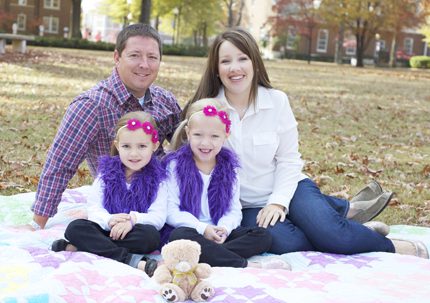 
Jessica and Derek Nichols’ emotional journey has been one of faith since the loss of their unborn son, Gavin – “the big miracle” who saved his mother’s life.

Jessica recently spoke in public for the first time about her faith and family story with students at the University of Central Arkansas, where Derek is an assistant women’s soccer coach. She titled her presentation “The big miracle.”


In 2005, Jessica and Derek returned to his home state of Kansas, where he worked as a soccer coach. Away from family, the couple had to rely on each other. “It was a good thing for our marriage,” Jessica said, explaining that they were active in a church and took classes. “I just wanted to have God No. 1 in our marriage . . . It strengthened us and gave us the foundation we needed.”


In November 2006, the couple welcomed their first child — Haley. Jessica experienced preeclampsia — which includes swelling and high blood pressure — during the pregnancy, making it dangerous for her and the baby. “The only cure is delivery,” Jessica said, explaining that Haley was born eight weeks early and spent six weeks in neonatal intensive care.


Afterward, the couple was cautioned against getting pregnant again real soon because of the fluid that had built up around Jessica’s heart. “Sure enough, we got pregnant again.”


Jessica’s second pregnancy was less eventful, and Baby Kensey was delivered at 36 weeks.


With two little ones, Jessica described the next two years as “crazy” as she stayed at home to raise her children. “We did without a lot,” she said. “I wouldn’t trade it for anything.”


Happy with their little family, Jessica still hoped they would have more children. Derek was happy with two and she had wanted four so a natural compromise would be three. “I always had that tugging.”


When 2010 rolled around, Jessica decided she was ready for a lifestyle change — mentally and physically — as her 30th birthday approached. She was still active in church, working to strengthen her faith while being a good mom and wife. “I decided my healthy years are going to be my 30s,” she said.


In May 2011, she ran her first half-marathon. “It was an accomplishment, and I was excited to be in the best shape I’ve ever been in.”


As Haley entered Pre-K, Jessica and Derek began considering another child, and in November 2011, the couple learned they were pregnant. “We were so excited it was going to be a boy.”


The name they picked out was Gavin. “Derek thought it would sound good when yelled on the soccer field,” Jessica said with a smile.


A few months later, Derek was hired at UCA, fulfilling his goal of one day coaching at his alma mater.


In May and June, the couple began the move back to Arkansas. They were settled in by early June when the preeclampsia set in again, and the doctor ordered couch/bed rest. Jessica had been told that typically the risk decreases after an initial pregnancy, and that had been the case with her second baby. “I had complete faith this pregnancy was going to be just fine.”


July 12 was the first day of the couple’s “journey,” as Jessica describes it. She was almost at 37 weeks and was “super excited” by her first full-term pregnancy. The bed rest had yielded positive results, dropping her weight and lowering her blood pressure.


“I was doing what I needed to do, and it was showing,” she said. “I never thought I’d be going through what was about to hit.”


After a family get-together earlier in the day to celebrate a birthday, Jessica awoke about midnight and was “very uncomfortable.” She thought it was labor — the first time that had occurred at home instead of induced in a hospital. “I tried not to disturb my husband. An hour and a half went by and I woke up Derek. I remember sitting on the bed and telling him, ‘I feel like I’m having a heart attack, but it’s labor,’” Jessica said, adding that her upper back and arm were hurting.


The couple woke up Derek’s parents, who stayed with their two daughters, and the two headed to a UAMS hospital where Jessica was being seen because of her high-risk pregnancy.


“I was still having pains, but I was still relating everything to labor. I was having a hard time breathing . . . I was just focusing on breathing and was praying to God.”


At the hospital, Jessica was admitted to the obstetrics unit where she told the staff about pain between her shoulder blades. “All the signs were I was in labor,” she said, explaining they began inducing. Jessica’s blood pressure — normally low — had shot up extremely high.


On Friday, July 13, Jessica’s sister posted one of many Facebook messages updating family and friends about Jessica’s condition and asking for prayer. “I’m a true believer in God and God’s faith,
” she said. “He can do anything.”


Sometime July 13 or 14, a decision was made to stop labor and focus on other areas to determine what was wrong with Jessica. A 45-minute MRI — which was a struggle for Jessica because it was difficult to breathe and yet she had to remain still — did not indicate any blockage in her heart.


Still, a cardiologist told the couple there were inconsistencies in Jessica’s test results. “He said we can’t find anything wrong with your heart, but your numbers are coming back wrong.” He wanted to move her to ICU, but she told him she wouldn’t go unless her husband was allowed in with her. “Derek’s my backbone. Besides God, he is my strength and has been with me through everything.”


That evening, Jessica began to feel bad again and remembered how it felt with Haley when she had difficulty breathing because of fluid in her lungs. “It felt like I was drowning from the inside,” she said. “I started having that feeling come over me.”


WHICH LIFE TO SAVE


As the medical staff frantically worked on Jessica, Derek was asked to leave the room, which he refused to do.

“They said, ‘We have six minutes to get Gavin, if your wife doesn’t make it.’ He kept telling them he wanted both. He didn’t want to choose . . . I’m here today because he wanted both of us.”


Jessica said the doctor had talked about a cardiac catheter procedure, “but I was so worried about Gavin and how it would affect him.” When they did the procedure, they discovered there was no blockage, but the main artery in the front of Jessica’s heart was dissecting (coming apart). Later, they speculated that when her pain began at home, the artery had torn a little, but it wasn’t detected with the MRI.


That night, the front artery was coming apart, and her heart grew weak. “There was no other option but to do open heart surgery.”


Jessica said she was “in the right place at the right time with the right doctors. God’s hand was in that.”


Family and friends returned to the hospital, with prayer circles in the waiting room. Updates were also included on Facebook. It was a roller coaster for those waiting.


Jessica’s immediate family was escorted to a “little room” where the doctor consulted with them. The open-heart surgery was expected to last four hours but instead took six and a half. Jessica had three bypasses.


Gavin did not survive the surgery. “Gavin’s heart slowed and stopped.”


The 48 hours after the surgery were critical, and Jessica’s condition improved. Initial attempts to take her off the ventilator were unsuccessful, but a fourth attempt on July 17 worked. “I remember my family standing around me,” she said. Unable to talk, she communicated by signing to them.


The doctors described Jessica’s precious baby as an angel who saved her life. Jessica shared with her family that during the time she was asleep she experienced an indescribable peace and saw God. “I’m only speaking the truth. He came and told me everything was going to be OK.”


Jessica doesn’t remember anyone telling her that Gavin had died. “I just knew he was gone.”


As doctors and medical staff floated in and out of her room in the days that followed, Jessica had to recount for each one her medical emergency. “Gavin had gone to be with the Lord, but he was still in me,” Jessica said.


The plan was to wait until her body had recovered and she had regained her strength before delivery. “On July 22, my body went into labor.” Her family surrounded her in a prayer circle during the delivery.


“I knew God had gotten me to that point . . . I gave birth, and that was an experience like no other. I thank God we had Gavin for the little time we had him. The doctors say he saved my life,” she said, explaining because of him they were at the hospital where she could receive the emergency care needed. “My heart was going to do what it was going to do.”


On July 24, Jessica returned home where she and Derek had to share with their daughters that their baby brother was in heaven. “They were expecting Gavin to come home. We told them what happened. They were sad, but in their childlike faith they were overjoyed he was with God. That took me back. That’s how I should be. It’s how we all should be.”


Jessica is appreciative of family and friends and the UCA community, which “stepped up to show the family love and support. Also for the Conway Regional Cardiac Rehab staff, Jimmie, Judy and Ashley for getting my health back to where it is today.”


Jessica is interested in sharing her story with others and offering a helping hand to those who have suffered similar losses.


While there are still difficult times, Jessica describes Gavin as “the little guy who saved me. He’s our little miracle.”