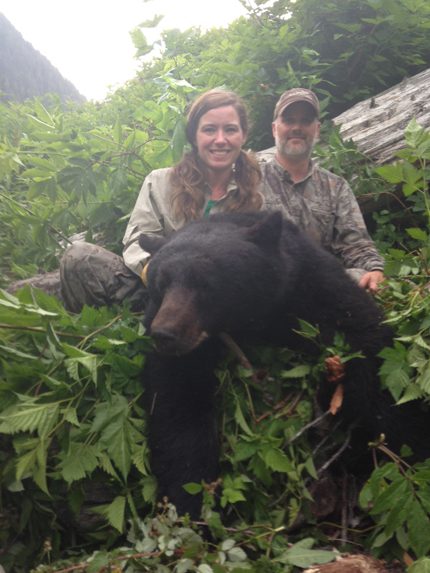 23 Jul 'The best vacation ever'

The two began discussing the trip when they celebrated their 10th anniversary. While their anniversary isn’t until September, they decided that it would be better to make the trip during the spring when the hunting season is better.

“I wanted to do it for a long time,” Jayme said, explaining that they had been unsuccessful in hunting bear in Arkansas.

The family enjoys many outdoor activities, like skiing. “We do a lot of outdoor stuff as a family,” Jayme said. “We say let’s enjoy what God gave us.”

Hunting is also a favorite. “Justin’s a big hunter. He goes a lot,” she said. “My son loves to go with his dad. They are big hunting buddies.

While the discussion started five years ago, the trip was booked in February. “I’d rather do that than have a piece of jewelry,” Jayme said. “I wanted it to be more about the adventure.”

While researching hunting options, the couple learned that Vancouver Island in Canada is well known for its black bear. “I always wanted to go to Canada, and I wanted to hunt black bear,” Jayme said.

The two departed from the Little Rock airport on June 1, and the adventure began. When they landed in Denver, they had 10 minutes to catch their connecting flight. “It was the first time I sprinted in cowgirl boots,” Jayme said with a smile.

After staying the night in Vancouver, the couple boarded a small prop plane for the next leg in their journey. There was only room for seven or eight on the plane. “I sat right behind the pilot,” Jayme said. “I was worried about that [part of the trip], but it was the best flight we had.”

An outfitter picked them up and transported them to the lodge, where they and three other hunters were paired with a guide.

The Jeanes were impressed with the scenic surroundings on the island. It is also home to a variety of wildlife, including eagles, deer, elk, mountain lions and bears. In their five days on the island, they saw 41 bears. “It’s a mountain range surround by ocean and lakes,” she said. “It’s probably one of the most beautiful places I’ve been.”

Jayme compared their experience to that of a roller coaster ride. The days spent hunting were long, from 10 a.m. to 11 p.m., because there was a lot of daylight in that part of the country. Sunrise was typically around 5:30 a.m. “By the end of the week, we were so tired we were sleeping through sunrise.”

The hunts — described as “spot and stalk” — also involved a lot of hiking and were taxing. “We would drive around until we saw one,” she explained. “Then, we would stalk it until we could get close enough to get a shot. It’s very exciting at times.”

But, when the shot wasn’t there or the bear turned out to be female, there was a letdown. “We had several of those highs and lows.”

While there was a close encounter or two with a bear, Jayme said she never felt scared. “One walked real close to use,” she said. “It’s neat to see them up close like that . . . You’re so excited, you’re not scared.”

On one occasion, a “nice bear” was spotted, but Jayme was unable to set up in time to get a good shot. “The window to shoot is very narrow,” she said. “I was very upset when we went back that night.”

On Wednesday, Jayme shot at a bear that she either missed or only grazed. They searched for two hours and again the following morning, but there was no sign of the bear. “I went back Thursday determined.” Jayme admits that she was particular while hunting, but knew it was a gamble. If she waited too long for the right one, it might be too late and the trip would be
over.

On Thursday, Jayme had another chance as they spotted a bear eating berries. “We watched him for a long time doing that,” she said. “I was not nervous. It felt right. I knew I had a good shot on him.”

Jayme’s bear weighed 250 to 300 pounds, with an 18-inch head. Justin shot a bear the following day. It was the second largest bear that had been hunted this season.

The bear meat was donated to a bird raptor rescue program. The bear hides — keepsakes from their memorable trip — are being processed for rugs and will be shipped to the 501 later this year.

Jayme took lots of notes about what they saw as well as photos. Justin also videotaped the hunts. “It’s neat to go back and re-visit them.”

Jayme reflects fondly on the hunt, the beauty of Canada and the time she spent with her husband. “One day we’ll go back,” Jayme said. “I’d go back tomorrow. It was my favorite vacation ever.

“It wasn’t just a trip. It was an adventure.”