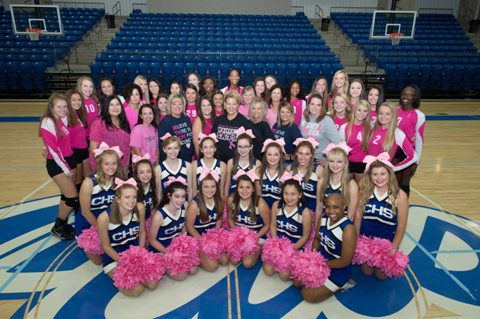 
The Conway High School volleyball and dance teams, along with coaches and parents, are rallying around a local mom who is facing her second battle with breast cancer.


The Eighth Annual Pink Night game will be held 5 p.m. Tuesday, Oct. 11, against Little Rock Central at Buzz Bolding Arena, with proceeds going to Tina MacNamara. The event originated with the high school volleyball team, but this year the dance team is joining the efforts. Tina’s daughter, Madeline, is a member of the dance team.


“Every year, we raise money for someone who is fighting cancer,” said Andrea Bailey-Fournier, assistant volleyball coach at CHS. “I came up with the fundraiser after my aunts were diagnosed with breast cancer. We have raised money for former players, players’ parents and people in the community.”


Last year’s Pink Night was personal for Andrea. “At the age of 57, both of my parents were diagnosed with cancer within two months of each other. I was unable to work while I took them to chemo treatments, and I felt Pink Night would be cancelled. I was wrong. My team, along with parents and other volunteers, kept Pink Night alive. They chose my mom and dad as the recipients and raised almost $13,000 for their medical bills.”


When she created the event, Andrea never considered that her family would be a recipient. She said in previous years she felt sorry for the families battling cancer because of the enormous medical bills and just wanted to help them.


“When my family was in that position, I realized how important it was and how big of a difference it made,” she said. “I never thought we would be in that boat, and I hope we never are again.”


Andrea got some of her ideas for Pink Night from college teams. She said the Conway team was the only high school in the conference to initially participate, but now four or five other teams have similar events. Conway players have special pink jerseys for the Conway event and appropriate away games. “I think about half the teams in our conference now hold a pink night.”


Each year, Andrea emails players and their parents to seek nominations for the beneficiary. Tina’s selection gives the volleyball and dance teams an opportunity to join forces.


Money is generated by selling a Pink Night T-shirt throughout the school district. Last year, almost 400 shirts were sold. There is also a raffle, with tickets $2 each, for prizes donated by local businesses. Some donations are also made anonymously.


“The whole school comes together to raise money, and the community, too,” said Anna Leigh Drennan, a senior on the volleyball team. She described Pink Night as one of the biggest events on campus. She said that in addition to the T-shirt sale and raffle, students also collect spare change. “That’s a big thing. We raise a lot of money off that.”


Andrea expressed her appreciation to the community for its support of the event. She said nearly every locally owned business that has been approached has helped. “That just says a lot about Conway and our willingness to support one another. The businesses really help us out and expect nothing in return.”


Tina, who has helped with Pink Night in previous years, was humbled to learn that she would be this year’s recipient. She shared with Andrea that her family had utilized a lot of financial resources and energy during her first battle.


“When (dance team coach Sonya) Stephens called me, I was just so thrilled. It’s just kindness, and I’m so grateful,” Tina said.


Tina and her husband, Patrick, have two children. Madeline is a junior, and Creed is in the fifth grade at Conway Christian School.


Tina, a former teacher in the Conway School District and at Conway Christian School, was 44 when she was diagnosed with Stage 3C, Triple Negative Inflammatory Breast Cancer in August 2014. The week that she was scheduled for her regular checkup, she noticed her breast was swollen and had a pink rash like a sunburn.


“When he (the doctor) saw it, he knew immediately.”


In the days that followed, Tina had a mammogram and a consultation with a surgeon about a biopsy. “I did what you’re not supposed to do. I Googled, and I knew exactly what I was dealing with. I have since been banned from Google. Every once in a while I cheat and I Google and I always regret it. If I have any advice for anyone, it is stay off the computer . . . It just feeds your fear.”


During the ultrasound guided biopsy, Tina said the radiologist, who had an assistant, initially did not see anything. “When she put the needle in, they were chit chatting, and as soon as she hit it, she stopped. They stopped talking, both of them, and that’s when I knew. They didn’t have to tell me a word.”


The following day, a Friday, Tina was told that the biopsy indicated she had Grade 3 breast cancer. Grade 1 is the slowest growing, and Grade 3 is the most aggressive.


The couple spent the weekend trying to absorb the information and sought the help of their pastor, Rod Loy of North Little Rock First Assembly of God. “He was very instrumental in helping us process this before we told anyone.” (Tina has chronicled her journey since being diagnosed in 2014 and shared her faith at teamtina.me.)


“Faith in God does not mean it protects you from trauma and the evil, ugly things of the world,” Tina said. “Faith helps you handle things that happen to you.”


Tina does not know how individuals can face a health problem, like cancer, without faith. “God is God. God is able, and no matter what, God is good,” she said. “I wanted my kids to see me walk through this in faith.”


With the help and support of family, who offered to care for the couple’s children when needed, Tina sought treatment at MD Anderson Cancer Center in Houston and participated in a promising clinical trial. Her diagnosis was very rare, affecting only 1 to 3 percent of women diagnosed with breast cancer. She and Patrick made 21 trips to Houston, leaving Sunday morning and returning late on Tuesday, which was especially difficult for their children. “We had so much support. I don’t know how we could’ve done it without it.”


Her 51-week treatment included 17 rounds of six different types of chemotherapy, a double mastectomy and 33 rounds of radiation.


Tina completed treatment in August 2015 and was declared cancer-free. She was one week away from a full year without cancer when it was discovered the disease had returned. She was heartbroken. A PET scan revealed that Tina now has Stage 4, metastatic breast cancer.


Today, an inflammatory breast cancer specialist in Boston is collaborating with Tina’s oncologist in Little Rock on her treatment. Tina is taking oral chemotherapy and will possibly be participating in a clinical trial, which will mean a trip to Boston once every three weeks.


After her second diagnosis, Tina became concerned with how some of her financial needs associated with treatment would be met. The call that she had been selected as this year’s Pink Night recipient has helped alleviate those concerns. “The only words I know are thank you, thank you, thank you. I’m overwhelmed with gratitude that people would take the time to organize something and contribute to it so I can extend my life.”