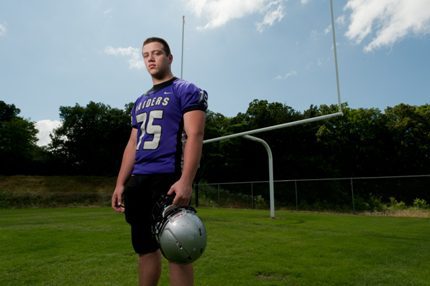 
The Riverview Raiders faced a huge change last year, transitioning to new coach Mike McCain. Under new leadership, the Raiders marched right back to the playoffs.

Among great change, Nels Owens was a constant for the Raiders.


“Last season, Nels was a team leader and demonstrated all the qualities that we want in a Raider football player,” McCain said. “Nels is always the first one ready to practice or lift. He is a member of our 1,200-pounds Club and our Big Gun Club.”


The senior right tackle/defensive tackle was selected to this year’s 501 Football Team — 24 players representing all 11 counties of the 501. The team boasts the best the 501 has to offer both on and off the field. Owens was nominated by McCain.


After navigating a tough 2-3A conference, the Raiders found themselves back in the playoffs, where they fell at Green Forest (Carroll County).


Another return trip to the playoffs could be slightly more difficult this fall as the Raiders make the move from 3A up to 4A.


“[The 2-3A was] a hard conference,” Owens said. “It made us better as we went along through the season. Moving up to 4A this year, I’m looking forward to meeting Newport. That should be a really good game. They’re one of the best teams in 4A — a really fast team. I think we can keep pace with them.”


Owens has played football for only four years, but he’s picked up the game quickly and has become a dominant presence on both lines for the Raiders, and outside gridiron, too.


“His strength is his footwork, and he loves the game,” McCain said. “He serves on our team’s leadership council and displays very good leadership qualities in the classroom. He leads by example, is very unselfish and is dedicated to excel.”


Owens was drawn to the sport after growing up watching it with his dad.


“Even though people think he’s a nasty player, he goes 110 percent all the time,” Owens said. “I try to model after that. I feel that I’m a very aggressive player. You have to intimidate the person you’re lined up against. It’s [mental] — more of an intimidation factor than [physical].”


The highlight of Owens’ career so far is forcing four fumbles in one game against Southside Batesville.


Owens also participates in track for the Raiders, throwing shot put and discus. He earned a “couple of ribbons” last year.


Although his senior year is just under way, Owens has his future beyond Riverview in mind.


“I enjoy any computer class and working with technology,” Owens said. “I want to major in animation and design. I want to go to the University of Central Arkansas.”


The Raiders are currently 0-1 on the young season. They travel to Walnut Ridge this Friday.