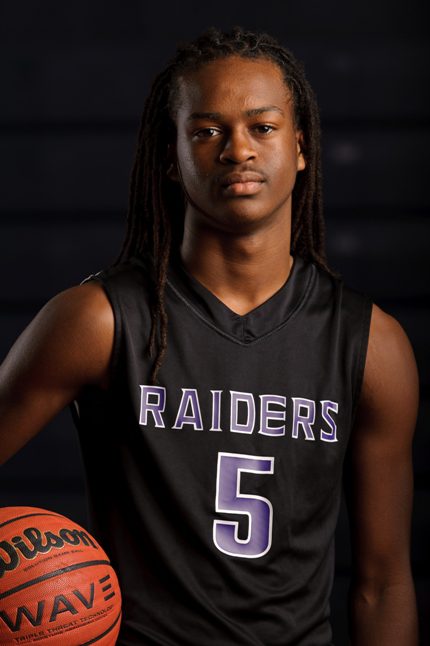 
Riverview opened its 2015-16 campaign with a 10-point loss. Since that game, however, the Raiders have reeled off 11 consecutive wins to take sole possession of first place in the 2-4A conference. According to sophomore point guard J.T. Smith, the team’s success is all about great chemistry.


“Our entire team is close,” Smith said. “We’ve been playing with each other since we were little. We would go to the gym together on Sundays and play pick-up basketball with the grown-ups. They wouldn’t take it easy on us, and I think that helped us become as strong as we are today. Whatever we do, we do it as a team. On the court, we’re really good together. Off the court, we’re hanging out with each other almost every single day. You couldn’t find a closer group of players than us.”


Smith was selected to this year’s 501 Basketball Team — 35 players representing the best the 501 has to offer both on and off the court. He was nominated by his head coach, T.J. Coleman.


“J.T. knows the game,” Coleman wrote in his nomination. “He sees the floor and makes plays in clutch moments. He makes players around him better, gets other players open and is always motivating his teammates to put in extra work outside of practice.”


Despite its 11-game winning streak, Smith says that his team learns something new about themselves each game. One win, however, gave the Raiders their biggest confidence boost of the year.


“Our biggest game of the year was our 79-76 win over Helena-West Helena,” Smith said. “They were a really good team that tested everything we had on the court. Our team has great chemistry, and we were able to adjust and force the game into overtime. We ended up winning by three points. It was a huge confidence booster for us.”


Looking ahead to the Raiders’ schedule, Smith says there’s one game he has circled on his calendar.


“Maumelle,” Smith said. “They’re a really good team, and they have a really good player in Shawn Williams. I’m looking forward to playing against them. The Hornets provide a very good challenge that we need as a team.”


A big contributor to the team as a freshman last year, Coleman says that the talented Smith is destined for an even bigger season this year.


“J.T. was all-conference as a freshman and one of the top five players in his class in the state,” Coleman said. “He played in 31 games for us last year. As a sophomore, he already has experience. This season, I expect him to make big plays and control the game for us.”


“This year was really special for me,” Smith said. “I had a scout from the University of Arkansas coming to my games to watch me play. I was able to go to some Razorbacks games as well. I’m really excited for the next few seasons on the football field.”


Though just a sophomore, Smith often dreams about playing athletics after high school.


“I want to go to college to play sports,” Smith said. “Football or basketball — it doesn’t matter to me. One day, I want to play on the professional level.”


Riverview plays Maumelle in the Beebe tournament at 5 p.m. Monday.