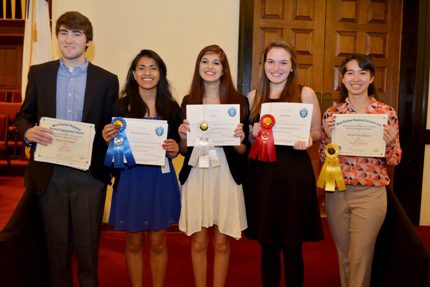 A study on a different approach to deliver cancer-fighting drugs during chemotherapy and a paper on apartheid in South Africa and the Angolan Civil War were the top research projects during the 2015 West Central Regional Science Fair and Senior Research Symposium at the Arkansas School for Mathematics, Sciences and the Arts.

Deisy Abarca, a senior from Hope, was recognized as the overall winner of the science fair for her research on using graphene sheets as drug delivery vehicles into cancer cells. Beau Hunter, a senior from Malvern, was recognized as the overall winner for the Senior Research Symposium, in which students focused on humanities subjects. All projects were the result of the Fundamentals in Research Method projects each ASMSA student must complete as part of their graduation requirements.


Abarca studied whether the graphene sheets — which are two-dimensional, atomic-scale hexagonal lattices — could be used to more safely and more effectively deliver cancer-fighting drugs to cancer cells while causing less cellular damage. The project uses advances in nanotechnology to present the possibility of using the graphene sheets to deliver the drugs. She said her research showed the graphene sheet delivery system was more effective than the cancer drug alone.


“It’s a building block; it’s the first step in an approach that could reform conventional chemotherapy,” she said.


Abarca spent a month of the summer between her junior and senior year working in a lab at the University of Arkansas at Little Rock’s Center for Integrative Nanotechnology Sciences. She shadowed researchers in the lab for about 2 ½ weeks before spending about a week on her own research.


Abarca said the experience was invaluable as she had not been in a lab of that level before.


“Even when I was just observing, that was incredibly valuable. It’s shown me hands-on, first-hand experience on where this field is going,” she said.


Abarca, Barto and Ray each qualified for an all-expenses paid trip and entry into the Intel International Science and Engineering Fair, the world’s largest international science fair. This year’s ISEF will be held May 10-15 in Pittsburgh, Pa.


Hunter said he has been interested in the two subjects for a long period of time. His research showed that a massive imbalance of power as well as the lack of knowledge of many nations of the atrocities taking place, including residents of the United States, contributed to the continuation of apartheid.


Hunter said he felt confident about his project going into the contest.


“I was very impressed with the competition, but I also knew I worked on mine. I knew that it met all of the requirements and I could present it to the judges,” he said.


Individual category winners as well as various special award winners are listed below.