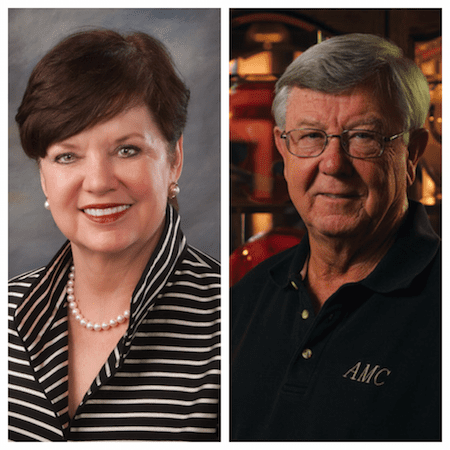 Posted at 1:46 PM in News by 501 LIFE
Share
The Conway Area Chamber of Commerce will recognize two individuals this year with its Distinguished Service Award – Steven Strange Sr. and Linda Tyler – during the organization’s annual meeting in March.
The Distinguished Service Award is the chamber’s highest recognition. Established in 1957, it recognizes an individual or group who has provided special service for the benefit of the community.
Steve Strange is president and founder of American Management Corporation. He grew AMC from a small insurance agency to a major corporation that serves insurance companies, petroleum companies, franchise operations and independent insurance brokers and agents. With 200 employees in Downtown Conway, the company has helped transform the area into a hub for white-collar jobs. Strange was instrumental in launching a degree program in insurance and risk management at the University of Central Arkansas, which has become one of the Top 15 collegiate insurance programs in the nation.
Strange is also a civic leader and philanthropist. He has helped with numerous capital campaigns and fundraising efforts in support of Hendrix College, UCA, Conway High School, the Boys and Girls Club, Braves Field and Arkansas Children’s Hospital Foundation.
As a former member of the Arkansas House of Representatives, Linda Tyler is a well-known leader in Conway. During her term in the state Legislature from 2009-2012, Tyler chaired the Public Health, Welfare and Labor Committee and co-chaired the Taskforce for Abused and Neglected Children.
Tyler’s volunteer and community service is extensive. She is the current chairman of the Conway Regional Foundation Board and served on the board for Conway Regional Health System for 12 years, including as board chairperson from 1989-1990. Other community service involvement has included the National Association for the Advancement of Colored People, the University of Central Arkansas board and the National Kidney Foundation. Tyler is a human resources executive at Targetsmart Communications and previously worked as a senior executive for Acxiom.
“We are thrilled to see the level of interest in our awards program,” said Brad Lacy, president and CEO of the Conway Area Chamber of Commerce. “Our nominations doubled this year, making it a tough decision for the judges. This resulted in a few ties for the first time.
“The award recipients represent the diversity of our membership and feature new businesses as well as seasoned leaders who have helped make Conway the great place we enjoy today.”
Debra Robinson, executive director of the Faulkner County Council on Aging/Faulkner County Senior Wellness and Activity Center, was selected to receive the chamber’s prestigious Good Neighbor Award. The council on aging/senior center was also selected to receive the chamber’s Outstanding Non-Profit award.


The Good Neighbor Award, established in 1973, is presented annually to an individual who has given of his or her time and talents and who is known for going above and beyond the call of duty to help others.
All three will be honored – along with others from the community – during the annual meeting, scheduled 6:30 p.m. Thursday, March 19, at the University of Central Arkansas.
The complete list of award winners:
The featured speaker at the meeting is Will Wilson of Jim Wilson & Associates, the developer for Central Landing, the 150-acre, mixed-used development that will be located on the site of the former airport. Wilson is responsible for the firm’s development activities, investment projects and tenant negotiations for retail projects.
Individual tickets are $75. Tables and sponsorships begin at $600. Both are available by contacting Mary Margaret Satterfield at 501.327.7788 or [email protected]. Tickets are limited so those interested in attending should reserve their space now.
501 LIFE is the awards sponsor for this year’s annual meeting.