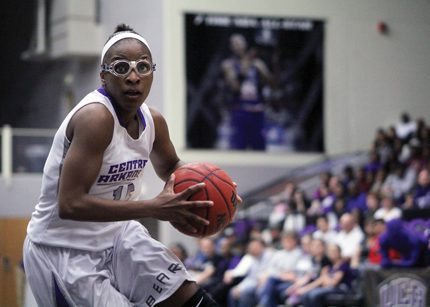 24 Apr Staying power: Injury hasn't 'stopped me from anything'

At first glance, Nakeia Guiden’s basketball career has been outstanding.

Upon further examination, it’s been nothing short of remarkable.

Guiden, a 5-foot-8 guard, recently finished her University of Central Arkansas career as the Sugar Bears fell at Oklahoma State in the opening round of the WNIT. She averaged 9.3 points (second-best on the team) and 2.2 rebounds, recorded 84 assists, 20 blocks (both second among the Sugar Bears) and 35 steals as UCA finished 24-7 and won the Southland Conference regular season title.

At Guy-Perkins High School, she earned all-state honors four years, playing under the legendary John Hutchcraft. The Lady Thunderbirds went 89-19 during her four years and reached three state championship games, winning in 2005. As a senior, she averaged 25.4 points, 6.4 rebounds, 4.3 assists and 5.2 steals.

And she has done all that after a fireworks accident when she was in fifth grade left her blind in her right eye.

“But that hasn’t stopped me from anything,” she said.

“When I was younger, I was all about playing basketball,” she said. “Nobody could stop me. I really loved it, and when the incident happened, it made me want to play even more. It never stopped me. It more or less pushed me to keep going.”

Guiden is the youngest child and only daughter of Joshua and Nadean Guiden. Her older brothers Keane and Isaac also played for Hutchcraft, as did her mother.

She started playing basketball in third grade and played for Hutchcraft starting in seventh grade. She grew up watching his daughter, Ashley, lead the Lady T-Birds to state titles in 2001, ’02 and ’03. Ashley Hutchcraft Nance played at UCA, then worked under her father as an assistant before going to Conway Christian and winning a state title before making the move to Conway High.

“I had the pleasure of watching Nakeia from junior high basketball at Guy-Perkins to college basketball at UCA, and words really can’t express how impressed I am with her as a basketball player and as an individual,” Nance said. “I believe the most amazing thing about Nakeia has been her ability to overcome her disability. I have watched numerous games and thought to myself, ‘How does she do it with only one eye?’

“I would cover one eye and try to put myself in that situation, and it never ceases to amaze me. Most people who have that tragic of an injury at such a young age would have given up sports, but instead she overcame it and learned to excel through it.”

Out of Guy-Perkins, Guiden was recruited by such in-state schools as UA-Fort Smith, North Arkansas College, Philander Smith and UCA. She liked the thought of UCA, she said, because it would allow her large extended family to follow her career. She said she had seven to 10 family members at every home game. On Senior Night this season, though, she had a contingent of 30-40, including her church family from Solomon Grove Baptist Church.

She said the biggest adjustment she found between high school and college ball was running scripted plays.

“In high school, we pretty much knew how each other played, so we’d just go play,” she said.

She is scheduled to graduate in December with a degree in kinesiology and physical education-exercise science. Her GPA is right at 3.0.

“I hope to end up coaching,” she said. “If not, I’ll do personal training.”

Her older brother Keane is set to graduate with her.

She’s involved with church activities, and she also works at the Boys and Girls Club.

When the end to her basketball career finally came, she said she found it to be bittersweet.

“I know that I’m going to miss it, but then I’m kind of happy to just relax,” she said.

Her personal highlight was reaching 1,000 points scored. She finished with 1,034.

Guiden said Kobe Bryant had been her basketball role model, but her mother has been her guide for life.

“She’s been through a lot in her life,” Guiden said. “I’ve only seen 21 years of her life, and she has never stopped, no matter what obstacle is in her way. She always reminds me to keep faith in God, and He will see us through anything.”

Perhaps unbeknownst to herself, Guiden, too, has been a role model.

“I can speak for anyone who has been associated with Nakeia and say that she has made us all very proud,” Nance said. “It has bee
n my pleasure to watch her through the years and call her a friend.”