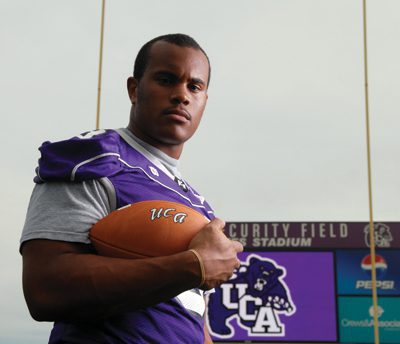 “The training is pretty tough sometimes,” Hart said. “I’m just trying to stay focused and take care of my business. Training can get repetitive, so I’m always fighting complacency – that’s the hardest part.

“I’m staying hungry, sitting back and enjoying this whole experience. I focus on the things I can take care of and just enjoy the process. It’s a task right now, more so than a dream.”

Hart recorded 21.5 sacks at defensive end during his two years at the University of Central Arkansas. The Bears finished 10-2 his junior year, but posted a disappointing 5-7 record last year.

“At times, it was really frustrating last season,” Hart said. “Compared to the year before, we had a down year. I was a little surprised that I was named Defensive Player of the Year again because my stats weren’t as good as my junior year.

“During conference play, teams were taking me out of the game with double teams and chipping with the backs. It just made me want to work harder and beat them anyway. I had to change certain things – the angle of my pass rush and my effort on every down. I had to become a better leader and a smarter football player. I learned a lot more as a player this year than last year because I had to work much harder.”

“My trainers have all played in the NFL before,” Hart said. “I’m really excited to participate with them because they’ve been there. They understand what it’s like to be a rookie. They are helping fine tune my pass rushing, and I’m also trying to improve my coverage skills and linebacker drops.

“All the scouts I’ve talked to are telling me that I’m being looked at as a linebacker, so being able to play in coverage and defend in space is my focus right now.”

Hart played in the Texas vs. The Nation All-Star Challenge Feb. 6, recording a tackle for the Texas squad. In 2009, 93 percent of the Texas vs.

The Nation roster went on to sign NFL contracts. The game gave Hart a chance to practice and play in front of more than 60 NFL scouts.

“[It was an opportunity] for them to see me practice up front and personal instead of just seeing me on film,” Hart said. “It was a chance to showcase my skills and body language on the field, and it was a tremendous opportunity to make a football team.”
The 2010 NFL Draft begins Thursday, April 22, and Hart is optimistic about his chances of being drafted or signing with a team.