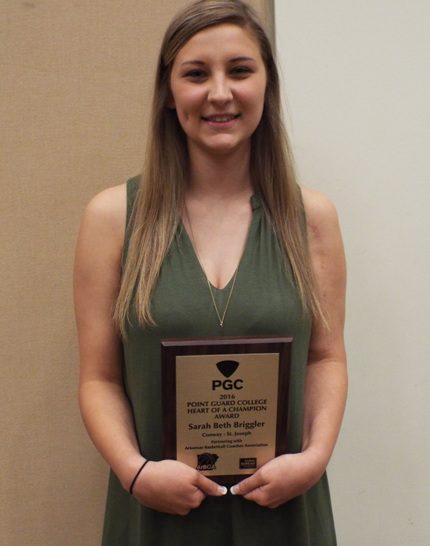 Sarah Beth Briggler, a senior at St. Joseph High School and a member of the 501 Basketball Team, was recently honored by the Arkansas Basketball Coaches Association at a banquet held in Benton.


Coaches and players from across the state attended the event.


Early on in her athletic career, Sarah Beth was playing for one of St. Joseph’s Pee Wee teams when she was diagnosed with a form of bone cancer. Chemotherapy and surgery arrested the disease, but it put physical limitations on her that wouldn’t allow close contact with other players. Her heart was still in the game, so she continued to suit up and practice all through high school. Even though she sat on the bench during actual competition, she served as a leader and inspiration to her teammates.


In her final season, she was briefly allowed to go into a couple of games and came through with a couple of three-pointers.