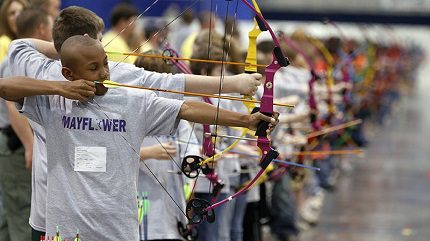 The Arkansas National Archery in the Schools Program’s 2018 regional tournaments will be held at a dozen schools throughout the state on Saturday, Feb. 10.


ANASP was established by the Arkansas Game and Fish Commission in 2008 and has grown tremendously. “We have about 550 schools participating in the program throughout the state,” said Curtis Gray, ANASP coordinator for the AGFC. “And we’re always looking to add more.”


During its first years, every school participating in the program that completed enough training sessions was invited to a state championship shoot. The program’s growth spurred the change from one statewide meet a year to regional qualifiers in 2013.


“We just couldn’t handle the volume of students coming to compete in a single two-day event any longer,” Gray said. “The regional tournaments also offer a chance for schools to compete a little closer to home before going to the state championship.”


By the time the last arrow is fired on Feb. 10, Gray expects to have scores submitted from nearly 6,000 youths.


“The first flights will get started at 8:30 a.m., and we have flights scheduled every hour with dozens of schools in each flight,” Gray said. “We have divisions for elementary-, middle school-, and high school-aged archers, so it’s going to be a busy day across the state.”


The following locations are scheduled for each regional tournament:


The top three teams in each division from each regional will be invited to the ANASP state championship, March 2-3, at Bank of the Ozarks Arena in Hot Springs. An additional 12 teams representing the host schools of the regional tournaments will be given entry into the state championship.


“Each school gets one at-large bid for hosting, and they get to keep all the proceeds from admission and concession stands during the regionals,” Gray said. “The at-large bid usually isn’t an issue, as many of the host schools also end up doing very well in the meet. Home-field advantage is pretty big in this archery format, because all the surroundings are exactly the same as during practice for most host schools.”