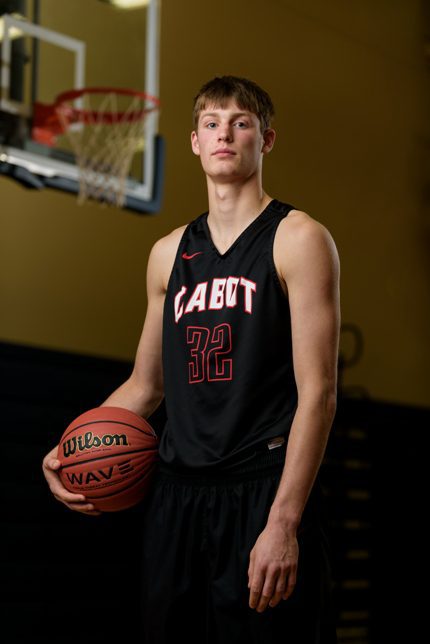 
Matt Stanley will never forget the night his Cabot Panthers overcame the odds to become Class 7A state champions. Over his 14 years of playing basketball, it’s something the senior center could only dream of.


“Winning the state championship last year has been my favorite basketball memory I’ve made,” Stanley said. “It left me speechless. It’s something that I’ll be able to tell my kids one day — that I beat [Bentonville’s Malik Monk], someone that might be in the NBA one day, in the state championship. It was incredible.”


Stanley was selected to this year’s 501 Basketball Team — 34 players representing the best the 501 has to offer both on and off the court. The senior was nominated by his head coach, Jerry Bridges. The team is sponsored by First Service Bank and First Security Bank.


“Matt is a very good basketball player,” Bridges wrote in his nomination. “He helps us inside and outside and is very athletic for a big man. He is a very good teammate, a great kid to be around and very respectful to all.”


For Stanley, the Panthers’ title helped the senior overcome many hardships that he endured over his high school career.


“I’ve experienced quite a few personal challenges over my career,” Stanley said. “A few years ago, my mother was diagnosed with breast cancer, and I lost both my grandma and grandpa. When we lived in Vilonia, our family was hit by three tornadoes. We’ve all been through a lot.”


“This year, our goal is to be the best team that we can be,” Stanley said. “Hopefully we can go back and win it all again. I want to have the best unit Cabot has ever had. We’re one of the best teams in school history, and we have a chance to do something great again.”


“Matt cares more about what the team does than his individual accomplishments,” Bridges wrote. “He played a big role in our run to the state championship last year, and I expect him to be one of our leading scorers and rebounders this year.”


Repeating as state champions is no easy feat for any team. However, Stanley believes in his team’s ability to get the job done.


“Right now we’re playing well as a team, and we need to keep doing what we’re doing,” Stanley said. “Each of our players has a role that they stick to. Even if one of us has a bad game, someone else is there to pick us up. All season, different players have stepped up at different times, and it’s what makes us deadly. We’re taking the rest of the season one game at a time. If you look too far ahead, then you get lost. Coach Bridges always tells us that if you win your next game, you always get another one until you reach the top of the mountain.”


At 6-foot-8, Stanley uses his size to create advantages over his opponents.


“I’ve always had a height advantage, but I’m not like every other big guy,” Stanley said. “I can stretch the floor and play guard and post. I like to think that I’m an overall well-rounded player, but being tall has really helped me and my team.”


Off the court, Stanley runs track and field and is a member of Fellowship of Christian Athletes and Ecology Club at Cabot High School. In January, Stanley committed to playing collegiate basketball at Ouachita Baptist University.


“I had a lot of Division I schools recruit me, but OBU has always been there for my family,” Stanley said. “Both my sisters, Julie and Jessica, went there. I felt more trusting toward them, and that led to my ultimate decision.”


“Matt is an outstanding young man with a very bright future,” Bridges wrote. “He really is a great kid.”