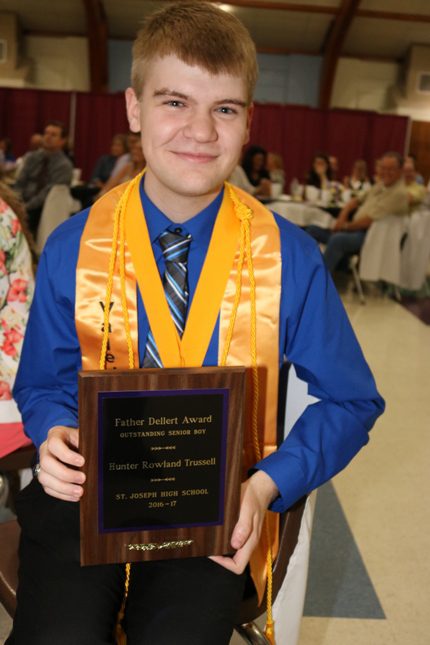 St. Joseph School held its Senior Scholarship and Awards Banquet on May 10 in the Parish Hall Dining Room. Several college and university representatives, along with individual benefactors, presented scholarships to members of this year’s graduating class.


A number of academic awards were also handed out. Among them was the Father Dellert Award, which is named after Father Sylvester Dellert. He had been a pastor at St. Joseph’s for more than a decade before his death in 1969. The award goes to the senior boy and girl who best exemplify what a St. Joseph student should be; a truthful person of faith and intelligence who sees God and respects Him in themselves and others.

This year’s recipients were Hunter Trussell and Gabrielle Hathaway. Trussell is a son of Larry and Dr. Anne Trussell. He was also chosen as one of the school’s three valedictorians. He’ll be attending Hendrix College in the fall. Hathaway is a granddaughter of Robert and Rosenda Hathaway and plans to enroll at the University of Arkansas Community College at Morrilton.