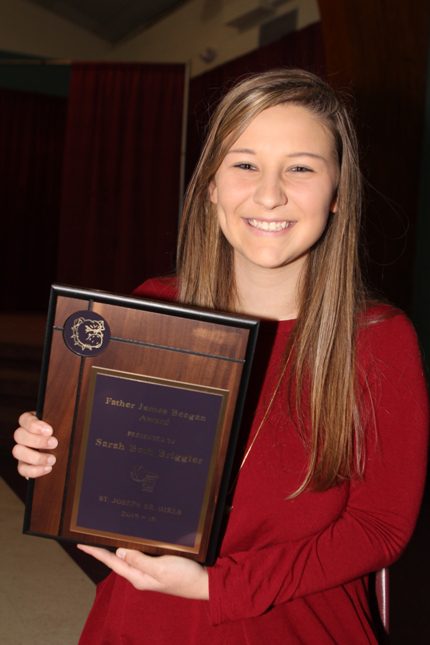 Athletes in the seventh through 12th grades were recognized for their achievements. Topping the list of honors were the Jim Banks and Father James Beagan Awards which go to the most deserving male and female basketball players in the senior class.


Landon Bruich received the Jim Banks Award named after the school’s first boys basketball coach who began the program in 1952. The award is given to a player for his "athletic ability, leadership, integrity, his treatment of fellow students and for his commitment to his school and church." It was first presented in 1973. Landon is a son of Bryan and Tracey Bruich.


The Father Beagan Award went to Sarah Beth Briggler. She’s a daughter of Mark and Michelle Briggler. Father James Beagan was an associate pastor at St. Joseph who was instrumental in developing the girls basketball program in the early 1950s. The award was created in 1978. It also goes to the student athlete who best demonstrates dedication, work ethic and a love for others.


Both Bruich and Briggler were named to the 2015-16 edition of the 501 Basketball Team for their contributions on and off the court.

Another prestigious award went to an adult volunteer. The St. Joseph Booster Club presented its annual President’s Award to Mike Prall for his service to the school’s athletic programs.