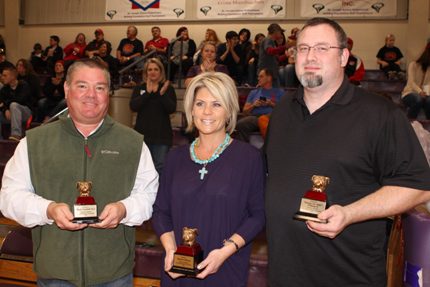 Three new honorary St. Joseph alumni were recently named at the 2015 basketball homecoming game. Although they did not graduate from St. Joseph, they’ve made lasting contributions to the school’s growth and development.


To become an Honorary Bulldog, it takes more than someone just mentioning a name to the alumni association. It takes an individual with the values and qualities that make them deserving of being a representative of the school and community, and an example to those who will become alumni one day. Dedication, service, a belief in what St. Joseph Schools does and can do, and Bulldog Spirit are all qualities that honorees embody.


In 2003, the first person to receive this honor was Principal Joe Mallett, who will be leaving at the end of this school year.


He has been a big part of the St. Joseph family for the last 36 years, moving from Virginia in 1980 to attend the University of Central Arkansas, and making St. Joseph’s his home ever since. His mother, Janet Schrekenhofer, a St. Joe alum, passed her love of this place on to him, and he and his wife Marilyn Enderlin Dail (Class of 1984) passed it on to their three children –  all of whom graduated from St. Joseph: Matthew in 2009, Heather in 2011 and Caroline in 2015.


Dail has assisted in a variety of capacities, including bingo, the St. Joseph Bazaar, and countless hours serving with and for the athletic program during the course of 30-plus years.

He has always been an avid fan of whatever sport St. Joe is playing.


He has been a great friend and loyal supporter of the St. Joseph family.


A family and consume sciences teacher at the school, Lieblong is described as a spitfire, no nonsense, take no prisoners, jump in with both feet and lead the way for anyone and anything. She runs from one event to the next, encouraging students to lead and be involved to better themselves, the school and the world. Her class teaches life lessons, responsibility, and to think and solve problems without being micromanaged. Her students thrive, knowing she has confidence in them to plan, implement and succeed at any challenge. Her idealism and optimism were crucial factors in the conception and completion of the new St. Joseph High School Cyber Cafe and Courtyard this year, and her motivation to spread the word about the school, parish and kids has influenced students to promote the school through YouTube videos and marketing techniques many adults would be amazed with.


She and her husband, Jason, believe in the school and church, its values, principles and offered education so much that their own daughters, Mary Alex and Karly Rae will one day join her in becoming a Bulldog.


Originally from Scotland (Van Buren County), Williams played against St. Joseph in high school basketball and never thought that becoming an Honorary Bulldog was a possibility.


In 1998, that all changed when he met his wife, Laura Hiegel-Williams (1995) and became a member of the school and church community. He has been volunteered and “volun-told” for major and minor events concerning the school and parish. He has helped maintain the After School Care Buildings, moved the program and all its belongings three different times and assisted in the remodeling and maintaining of its new facilities.


He has volunteered at the Country Store during the Bazaar, at alumni functions and helped the Cyber Cafe and Courtyard dream become a reality.


His devotion and belief in the school and parish are most evident through the legacy of all six of his children attending a place that he has been a part of making better.