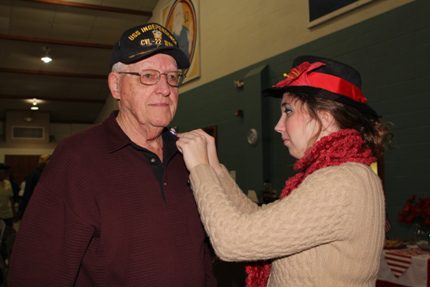 St. Joseph High School held its 15th annual Veterans Day observance on Nov. 10. Several students from the school’s Interact Service Club, which is affiliated with Rotary International, presented a program that included patriotic songs, tributes and prayers for the fallen.


A number of veterans from World War II through Middle East conflicts were in attendance. A reception hosted by the National Honor Society was held afterward.


Among the honored was 89 year-old Al Hiegel, a Navy veteran who served aboard the USS Independence (CVL-22) during the war with Japan. It was an aircraft carrier engaged in the Battle of Okinawa and the only carrier involved in the fight that wasn’t hit by a kamikaze suicide plane.