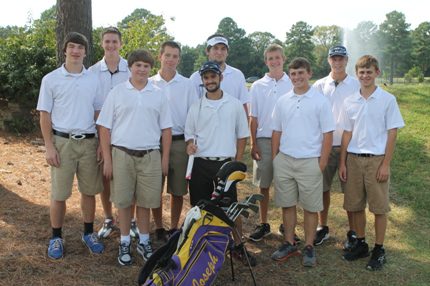 
Conway St. Joseph, one of the most successful golf programs in Class 2A, is preparing for crunch time.


The Bulldogs also won the 3-2A District Tournament.


Landon Enderlin returns for his senior season after winning the Class 2A individual state title in 2011 and finishing runner-up in ‘12.

The Bulldogs and Lady Bulldogs have just a couple of regular-season matches remaining — including one at The Links at Cadron Valley against Conway Christian and Mount Vernon-Enola on Tuesday, Sept. 17 — before the 3-2A District Tournament on Monday, Sept. 23, and Tuesday, Sept. 24. The girls state tournament is scheduled for Monday, Sept. 30, with the boys to follow Tuesday, Oct. 8, at Conway Country Club. St. Joe will be the host team for the boys tournament.


“I like our team this year,” Kordsmeier said of his Bulldogs. “We have Landon Enderlin, and that is always a good start for any team. I believe we will have a chance to compete well in both our district and state tournaments.”

Enderlin is a three-time all-state player and has qualified three times for the Arkansas High School Overall Championship, which brings together the top three players from each state tournament.


Also back for the Bulldogs is Landon Bruich, who also played in the state tournament last year as a freshman.


“We have a lot of newcomers,” Kordsmeier said. “We have 10 on the squad, and eight are first-time players. We will be looking to see as the season goes along who can step up for the team. Braden Brorman, Nash Nichols and William Luyet have played well early in the season.

“I believe we will have a good chance at competing for our district, and I believe we can get to the state tournament,” Kordsmeier said of the Lady Bulldogs. “Once you get there, anything can happen. This group is a hard-working one, and they put in the time in preparing for the season.”