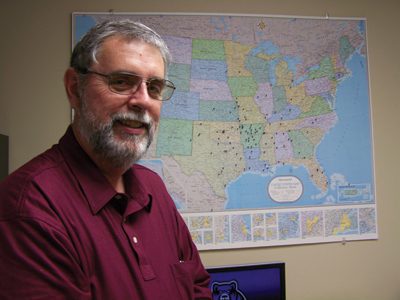 25 May 2010 Sportscaster is making the rounds

Rowell, 52, of Conway, recently wrapped up his 23rd year calling University of Central Arkansas basketball games. He called his first UCA game on KUCA 91.3 FM as a student in 1977. The Bears took on Arkansas Tech at the Farris Center.
“KUCA was only a 10-watt station back in those days,” Rowell said. “I went to work at KCON-AM in the fall of 1978, and I went full-time in 1980. The first three or four years, I called Hendrix games. Occasionally I would do a Conway High game or a St. Joseph game. Then in 1987, I started calling UCA games regularly.”

Flash forward 23 years – Rowell is a UCA employee in charge of managing KUCA. To say he’s come full circle doesn’t seem like enough. He’s seen UCA athletics move from NAIA to Division II to Division I. He’s gone coast to coast and international to call the Bears and Sugar Bears over the airwaves, but some of his best working experiences have come right here in the 501.

“Everywhere that I’ve ever called a game in the 501, people have just treated me royally,” Rowell said. “But I will say this – and it’s a testament to their school, staff and patrons – it’s unbelievable how St. Joseph would treat me when I called their games. They would knock themselves absolutely out to help me with whatever I needed. There’s places I’ve been to do Division I games where I haven’t been treated near as good.”

“A lot of these gyms aren’t designed to handle broadcast crews,” Rowell said. “Sometimes the media is the last thing people think about when they are building a gym or field. One year, probably 15 years ago, I called a game at South Side Bee Branch, and I had to climb up a ladder up to a camera deck. One false move and I would have fallen out. It was a great view to call a game, but it was really tight.

“After the game had finished, I was wrapping up my broadcast when all of a sudden they killed the lights before I was done. I was caught up in that camera deck all by myself.”

The 501 is full of communities that rally around the local schools and sports. The bigger schools get most of the attention, but the smaller schools sometimes have a little more charm.

“There’s something about going to a small school to call a game that’s different than going to a larger school,” Rowell said. “And that’s no slam on big schools, but it’s almost like the smaller schools are more excited that you’re there to call their game. Smaller schools really get a kick out of it, and bigger schools just kind of expect it.”
It’s been a few years since Rowell has called high school athletics for radio. His primary focus for the last few years has been UCA basketball and football.

“I’ve done 901 UCA basketball games in my career, and every one of them has a story,” Rowell said.
Since the move to Division I in 2006, the stories haven’t necessarily gotten deeper, but they’ve sure gotten bigger. Instead of traveling to Russellville, Ark., Rowell has been traveling to places like Lawrence, Kan. The Bears opened up the past season by traveling to the No. 1 ranked Kansas Jayhawks.

“Calling a game at Allen Fieldhouse was just incredible,” Rowell said. “Kansas has just so much history. When you arrive at a place, and you have students that have been camped outside for two days to get tickets – that’s just crazy. The atmosphere was like nothing I had ever experienced. Kansas ranks as my top spot. Playing Kentucky at Rupp Arena was incredible, too. We’ve got to travel to some neat places since moving up.”

Some not so neat places have also been on the schedule during the transition to Division I.

“Moscow, Idaho – it was an unusual place to call a game from, and you can’t get there from here,” Rowell said. “You fly from Little Rock to Dallas to Portland. Then you take a puddle jumper in a driving rainstorm to Spokane. When you get there, it’s snowing like crazy – and you still have to drive 90 miles to get to Moscow! It was by far the hardest place I’ve ever had to get to for a game.”

Rowell has called a game in 31 of the 50 states, and he’s called games from Cancun and the Bahamas. Out of all the incredible journeys, he still has one dream destination.

“I would love to call a game at Pauley Pavilion,” Rowell said. “When I was a kid, UCLA was the team that dominated college basketball. I would put Pauley Pavilion up there dead even with Allen Fieldhouse.”

But no matter what, there’s no place like home. For Rowell, that’s Wonderview High School – home of the 2010 1A boys basketball champions.

“I got to do a St. Joseph game at Wonderview in the early 1990s,” Rowell said. “You’re just as nervous as a cat when you go home. It was a really competitive ball game. It’s a real thrill to go to your old school and a call a game. Everyone in the business should get that opportunity at least once.”