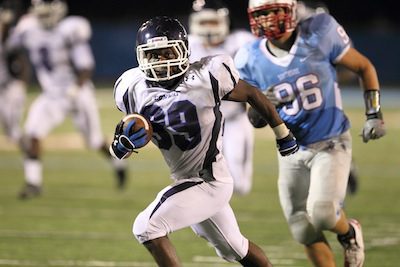 
Southside’s Austin Nolan hit Landon Lee for a 15-yard touchdown pass to give the Rebels the 32-37 lead with 32 seconds remaining in the game. Conway responded with a long touchdown pass of its own, but it was called back on a penalty, leaving the Rebels with the win.

Irby also scored earlier in the game with another 1-yard touchdown run – that came in the second quarter and gave Conway a 14-6 lead.


Other scoring for the Wampus Cats included an exciting 70-yard punt return for a touchdown by Corven Alexander in the second quarter and a 36-yard touchdown pass from Tyler Langley to Brandon Cox to give Conway its first score in the game with 6:26 to go in the first quarter.