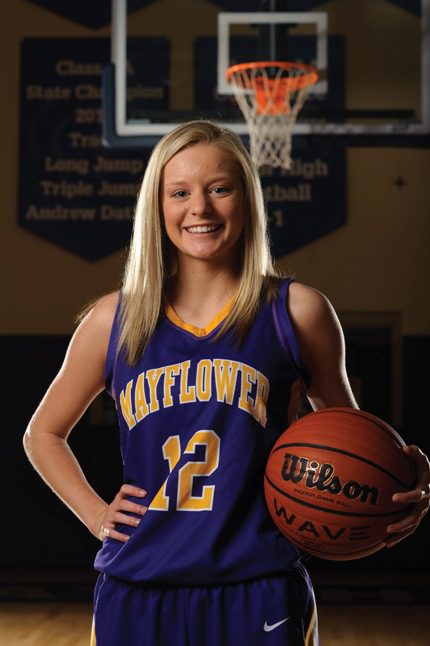 
When the Mayflower Lady Eagles needed a boost to their on-the-court ranks, the team turned to a place that not too many teams may have looked — Emily Hampton and Mayflower’s eighth-grade girls’ basketball team.

“At the end of our eighth grade season, Coach Frost asked five of us if we wanted to move up to the senior high team,” Hampton said. “I was the only one who wanted to move up. I was nervous, but I thought it would be a really good idea for my basketball career, so I made the move and I’ve never looked back.”


That was two years ago, and today, the sophomore shooting guard continues to provide the offensive and defensive presence that Mayflower head coach Lacy Frost saw in Hampton back then.


“Emily is one of those players that is fun to be around and makes practice more enjoyable,” Frost said. “Her motivation to be successful on and off the court makes her a vital asset to our team and a great example to younger girls in our program.”


Hampton was selected to this year’s 501 Basketball Team, which boasts the best the 501 has to offer both on and off the court. Hampton was nominated by Frost.
Last season, Hampton impressed easily as a freshman for the Lady Eagles.


“Last year, Emily was the only freshman that played and started for the senior high team,” Frost said. “She did an excellent job at playing her role and doing everything that was asked of her on and off the court. Emily made our senior high team better and more successful as a freshman last season.”


Though her skills on the court earned her a starting position on the team, Hampton believes there’s still plenty to work on as the Lady Eagles near the end of 5-3A conference play this season.


“I’ve been working to have a better free-throw percentage,” Hampton said. “It wasn’t very good last year and it’s something I’ve really been trying to improve this year. As a team, we would really like to go to state this year. We made it to regionals last year and lost in the first round. We have a lot of seniors and we had some new players move up and I think we have a really good chance of making it this year.”


“Emily is a very hard worker on the court,” Frost said. “She is one of those players that does all the little things that don’t get noticed as much, but are essential to the success of our team. I expect Emily to use her quickness and work ethic to help our team get stronger on the defensive end. Also, she is a good three-point shooter, which will benefit her team offensively.”


Off the court, Hampton is involved in Beta Club, National Honor Society, Student Council and FCCLA at Mayflower. She also volunteers her time for the school’s peewee basketball program.


“Last year, [former 501 Basketball Team member] Raegan Bartlett and I helped coach the peewee team. It was a lot of fun for both of us.”


In addition to her volunteer work on the court, Hampton also stepped up to the challenge when her hometown was devastated by a tornado in 2014.


“Emily spent a significant amount of time volunteering when the tornado hit the Mayflower community last spring,” Frost said. “She even worked overnight at times. She has worked as a staff member at Camp Champion at Conway First Baptist Church and performs well in the classroom. I know that she is a player that I don’t have to worry about her grades.”


At the end of the day, when she’s not playing the game she loves, she’s strengthening the friendships she’s made during her time on the court.


“I really like to hang out with my teammates off the court,” Hampton said. “We do a lot of team-bonding activities. We’re all really close and I enjoy spending time with them.”