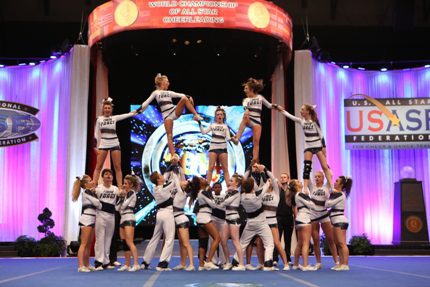 The title of the competition is an accurate description because squads from all over the United States and many foreign countries were competing. The Falcons were in the Small Senior CoEd Level 5 Division which is the largest division at this prestigious competition.

On Day 1 in the prelims, Cheer Force performed a tremendous routine with zero deductions which earned a No. 2 spot in Flight A which consisted of 31 teams. In addition, the score was sixth overall out of 66 squads from both Flight A and Flight B.  That score also earned them a spot to move on to compete in semi-finals the following day.

The “tweet” from the United States All Star Federation sums up the Falcons Day 2 Semi-final performance: “The Cheer Force Arkansas Falcons get the fans on their feet at Worlds 2014 with their stellar routine.”

It was a great routine but the score was not high enough to make the Top 10 that moved on from semi-finals to finals. The Falcons from Cheer Force finished 32 out of nearly 100 squads which was a tremendous accomplishment. This is a stellar group of young people and reaching this goal was the culmination of years of hard work.

Collin Weatherly, a senior on the Cheer Force Arkansas Falcons, was chosen by the United States All Star Federation as a “Top 10” scholarship finalist. He competed against cheerleaders from across the country for the honor. The competition was based upon leadership, scholastics, service and skill as a cheerleader. Collin was honored at the Worlds Cheerleading Competition Awards Ceremony and received a $2,000 scholarship.