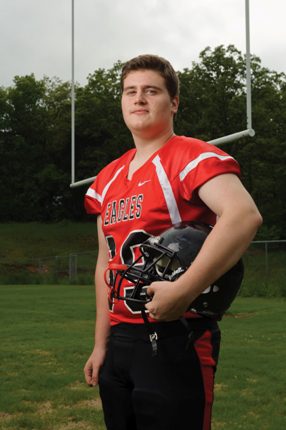 
There are many great life lessons that can be taught through the game of football — sportsmanship, teamwork and discipline, just to name a few — but for the Cutter Morning Star Eagles, who haven’t earned a victory since week five of last season, the game of football is more than what the scoreboard shows each week. It’s about perseverance and never giving up when the going gets tough.


“Win or lose, helping the team stay positive is important,” said Eagles’ senior lineman Brett Shelton. “We aren’t the biggest or the strongest team out there each week, and it’s easy for our guys to get their heads down. My goal this year has been trying to keep my team together and pumped up for football throughout the season. As a senior, that’s my job.”

Shelton was nominated by his coach, T.C. Shamel.


“Brett is a true believer in sportsmanship and hard work,” Shamel said. “He shows respect for his opponents in victory as well as defeat. He always has a smile on his face, has a great sense of humor and is always encouraging his teammates.”


Shelton plays a variety of positions for the Eagles, both offensively and defensively. Given his football background, Shelton says to expect nothing less of the senior.


“My dad is a football coach,” Shelton said. “Due to his job, we’ve moved around a lot. I’ve attended 11 different schools in my lifetime. No matter which school we ended up at, I always tried to play every sport I could and tried to be involved in athletics as much as possible.”


“Brett has a high football IQ,” Shamel said. “He is fast and has a nose for the ball. He’s a smart kid who is always working very hard to get better and puts his team before himself at all times.”


Despite the team’s record, Shelton plans to spend the remainder of his senior season leading his teammates to the finish line, one way or another.


“We are always focusing on improving,” Shelton said. “Each week, we want to get bigger, stronger and faster. We’re always working hard as a team, and I want to do everything I can to help us succeed together.”


After missing the majority of last season with a shoulder injury, Shelton says that he feels fortunate to get another opportunity to suit up for the Eagles.


“A personal goal of mine is to not get injured this year,” Shelton said. “Last season, against Bismarck, I was playing linebacker and was chasing their quarterback toward the sideline. On the play, I got clipped in the back and tried to catch myself with my arm. However, my arm popped out of its socket. The trainers popped it back in and I went back into the game. A few plays later, I was trying to block for our running back when I got hit in the shoulder and my arm popped out of its socket again. That time, when they tried to pop it back in, I broke two bones in my shoulder.”


Though the injury ended his season, Shelton still finds ways to turn his hardship into positivity.


“Although I broke my shoulder on the play, I also set the block that allowed us to score a touchdown, so I was okay with it in the end.”


Off the field, Shelton plays basketball for the Eagles and is a part of the school’s EAST lab. After high school, he plans to pursue a degree in engineering.


“I have big dreams for myself,” Shelton said. “I want to make as much money as possible and make my family proud.”