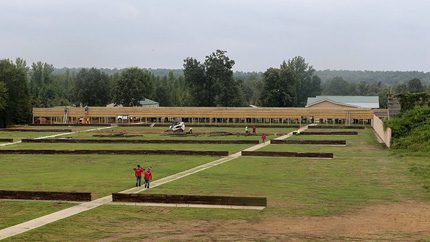 After extensive renovations and an expansion to the range house, the Dr. James E. Moore Jr. Camp Robinson Firing Range near Mayflower will reopen to the public Friday, Sept. 8, and the Arkansas Game and Fish Commission is celebrating the reopening with a special treat for anyone who wants to shoot.

“During our grand reopening, we will have free hot dogs, chips and drinks while they last, beginning at noon,” said Grant Tomlin, assistant chief of education for the AGFC. “And, all fees associated with using the range will be waived until Sept. 18.”


Tomlin says the cookout and free shooting opportunities are a way to thank all of the range’s patrons who have patiently waited during the closure, which lasted much longer than anticipated.


According to Tomlin, much of the delay was the result of this year’s unusually wet spring and summer.


“It’s not that it rained all the time,” Tomlin said. “But, the rains were spaced out perfectly to keep us from working on many things. As soon as it was dry enough to do dirt work again, we’d get hit with a new storm that soaked the area down for another week.”


Tomlin says many people familiar with the range will definitely see the changes that have been put in place to increase the range’s safety, capacity and comfort.


“This project was more than just adding some dirt or pouring an extra slab of concrete,” Tomlin said. “It was an extensive renovation that touched nearly every part of the range.”


The 200-yard rifle range was boosted with five additional shooting stations, bringing the total number of positions to 18. A cubby system was added in the new check-in area, complete with a rifle rest and sandbags for each rifle lane. Users will get their lane assignment and go to the corresponding cubby for supplies. The target frames for the rifle lanes are stored at each bench, which means that customers no longer have to carry them out from the range house.


“All the hard-packed shale berms on the rifle range have been replaced by wood walls to reduce the chance of any ricochets,” Tomlin said. “And additional ‘no blue sky’ baffles also have been added.”


These baffles above and to the sides of shooting stations are specially created overhangs, which prevent a shooter from being able to fire above the contained area of the range. An extra 8 feet of dirt was added to the backstop height, and the target frames also were shortened to keep the muzzles of rifles at a lower angle to the ground.


“Pretty much the only thing a shooter at the station can see is their target, the backstop and dirt,” Tomlin said. “So it greatly reduces the chances of a bullet going past the backstop.”


The pistol range also saw an additional “No blue sky” baffle added, as well as special rubber mulch to reduce the possibility of ricochets. The support posts to the covered shooting area, which used to be in front of shooters was moved behind the shooting bench, so there is less chance of a ricochet off of the support posts.


“The same LED lighting system as the rifle range also is featured on the pistol side, so shooters can tell with a glance if the range is ‘hot’ or ‘cold,’” Tomlin said.


Another much-needed addition was the creation of a special programs range to accommodate classes during the shooting day.


“We have a lot of beginning hunter, concealed carry and firearms safety classes that take place at the range,” Tomlin said. “Before, we would have to either shut down the range from regular public use or open the range after hours or during closed days. Now, we can have them shooting on the program range without taking the opportunity to shoot away from other customers.”


The range house also saw some attention during the renovation, including a nearly 1,400-square foot expansion for added comfort and capacity.


“Most of that was the previous front porch, which we enclosed to offer a heated and cooled waiting area with extra carpeting to muffle some of the report from the range,” Tomlin said. “We have televisions that will play hunting and fishing programs like Arkansas Wildlife, and we’ll be showing some football games during the season for people who are waiting for their turn to shoot.”


Tomlin says people who are waiting for a rifle or pistol station also have the opportunity to try their hand at other disciplines, including archery and shotgunning.


“We still have a great 3D archery range with an elevated platform they can shoot their bows at, and we still have a trap and skeet range on site,” Tomlin said. “With dove season being in full swing during the opener, it might be a good idea to shoot a few clays while you wait.”


The range will resume regular shooting hours, from 8:30 a.m. to 4:30 p.m. Wednesday through Sunday, on Sept. 20. Shooters must be checked in at the range house by 3:45 p.m. to put their name on the waiting list, but there is no guarantee a space will open before the 4:30 p.m. closing time.


For more information about the range, visit agfc.com/en/explore-outdoors/shootingranges/. To see pictures of their progress or check out the latest details, visit their Facebook page, facebook.com/Camp-Robinson-Firing-Range-1157531250955236/.