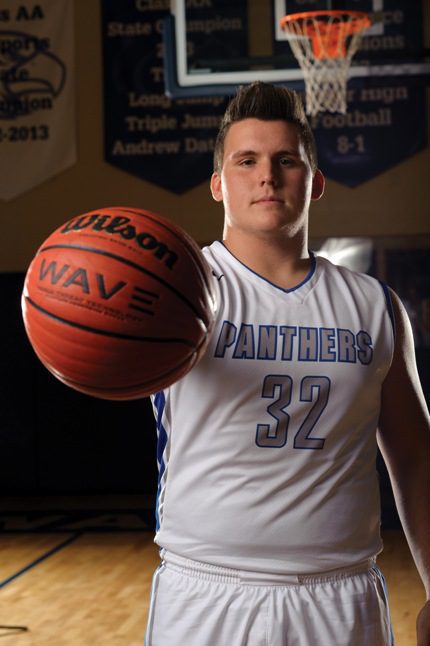 
After a successful junior season, Greenbrier power forward Kyle Ferguson appeared primed for a monster senior year. However, a week before the season began, he sustained an injury that would put his athletic career at Greenbrier in jeopardy and rob him of the chance to suit up one last time as a Panther.

“During practice, I suffered an avulsion fracture in my finger,” Ferguson said. “My finger got ripped out of its socket and part of my knuckle broke off in my tendon and got shot back up into my hand. I couldn’t move my finger and I still have difficulty extending it today. I was told by my doctor that I couldn’t play sports this year and that I would need surgery.”


It was a devastating blow for Ferguson, who was just getting the hang of high school basketball in the competitive 5A West conference. However, one week into the season, Ferguson received surprising news.


“I went back to the doctor for a checkup and I was told that my finger miraculously healed,” Ferguson said. “I couldn’t believe it. I was cleared to play sports this year. I get a second chance at a senior season. God blessed me with this gift, so I’m going to use it to the best of my ability.”


Ferguson was selected to this year’s 501 Basketball Team — 24 players representing the best the 501 has to offer both on and off the court. Ferguson was nominated by Greenbrier head coach Mike Simmons.


“Kyle is a leader both on and off the court, not just by action, but by character as well,” Simmons said. “He is always positive to his teammates and very encouraging. He is never negative to anybody on the team.”


Having only played two seasons, Ferguson got his start on the court with a little help from his biggest role model — his older brother Ty Ferguson.


“My brother is someone I really look up to,” Ferguson said. “After he graduated from Greenbrier, he got a job offer to coach an AAU team. He started working with me and helping me get better and he encouraged me to pick up the basketball and join the high school team.”


Another inspiration that Ferguson identifies with is one of his favorite basketball players, New York Knicks center Amar’e Stoudemire.


“I really like Amar’e,” Ferguson said. “He’s a great Christian player and he has had to overcome a lot of obstacles in his career, such as injuries to his eyes and knee. With all the obstacles in his way, he never gave up and is still out there on the court today. It’s amazing.”


As February begins, Ferguson and the Panthers find themselves with a steep hill to climb in order to reach the state tournament.


“Our team can go as far as we can reach,” Ferguson said. “Our coach has so much heart for us and so much coaching potential. He will take us as far as we can and he always helps us be the best that we can be.”


“Kyle’s best quality is that he plays as hard as he can the whole time he’s on the floor,” Simmons said. “His intensity rubs off on the other players. He is probably one our best three-point shooters and rebounders.”


This week, the team faces a tough test in the Morrilton Devil Dogs.


“Morrilton is among the best competition that we play,” Ferguson said. “They’re a very solid team and we feel that we are too, so we see it as two great teams going head to head. It’s exciting.”


Off the court, Ferguson plays catcher for Greenbrier’s baseball team and is involved with FBLA and EAST. In the community, Ferguson is a life group leader at New Life Church in Conway.


“Locally in Greenbrier, we have around 20 kids that come to church every Tuesday,” Ferguson said. “We meet after basketball practice and get to know each other. We talk about our problems and it’s a good support group to get good Christian, godly answers to all of life’s questions.”


With graduation on the horizon, Ferguson plans on spreading the word of God to children worldwide.


“I want to go to Ouachita Baptist University at New Life Church and start working on my degree to be in ministry,” Ferguson said. “I want to be able to travel the world for God’s will and be able to share God’s word with kids across the globe and watch them all be saved.”