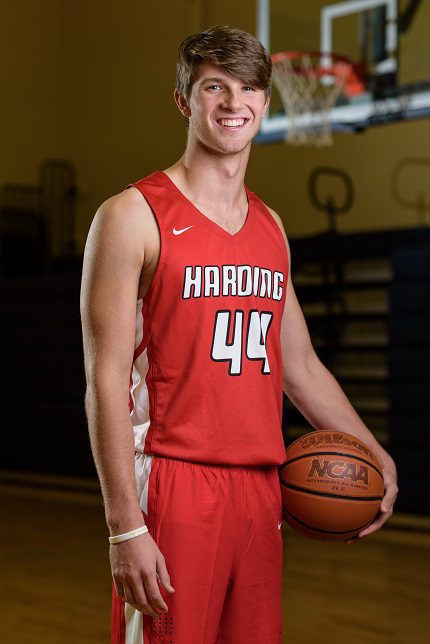 
After a disappointing early exit from the district tournament a year ago, the Harding Academy Wildcats have one goal this season — make 2018 a year to remember.


“Last year, we lost in the first round of district and ended our season short,” Wildcats senior forward Travis Turley said. “This year, I’d love to make it as far as we can in the tournament to make up for last year.”

Turley was selected to this year’s 501 Basketball Team — 37 players representing the best the 501 has to offer both on and off the court. The team is sponsored by Conway Ortho and Sports Medicine, Conway Regional Health System and First Security Bank. The senior was nominated by his head coach, Brad Francis.


“Travis is a very versatile player on the offensive end of the floor,” Francis wrote in his nomination. “He has the size to play inside but has the ability to step out on the floor and hit the 3. He was our leading rebounder and second leading scorer last season, and I expect him to have his best season this year. He will be one of the players that other teams will focus on.”


As one of the senior leaders for the Wildcats (15-4, 5-2 Class 2-3A), Turley is excited to add more memories to a great basketball career.


“I’ve had a love for sports from a young age,” Turley said. “I’ve been playing basketball since I could pick up a ball. I have memories in preschool of trying to shoot baskets with my brother, but never being able to even hit the rim. Some of my favorite memories are going to Branson to play in a camp with my team every summer. We always play mini golf one night and stay in a hotel together. This year, I’ve led the team in points so far, and it’s been fun because we’re a shooting team, so we just shoot a ton. One thing that I think would be cool to do this season is to get a triple double. It’s something that I haven’t done before, but it would be awesome to do.”


As the team heads into the final stretch of conference play, Turley and the Wildcats have their eye on an upcoming showdown versus Tuckerman — the last team to deliver Harding Academy a loss.


“Tuckerman is always a fun game to play because they’re good,” Turley said. “We haven’t beaten them yet, but it is always a close game.”


Off the court, Turley plays tight end for Wildcats football and is a member of Beta Club and Key Club at Harding Academy High School. In his free time, the senior enjoys camping, hiking and spending time with friends.


“I’ve lived in Arkansas my whole life, and I love it,” Turley said. “We have a little bit of everything from hiking to lakes and lots of outdoor activities that are fun.”


“Travis is friendly and kind to all students and classmates,” Francis wrote. “Travis is the Student Association President at Harding Academy and is involved in a number of service projects and mission trips with his church.”


“My relationship with God is the most important part about me,” Turley said. “I try to be humble in my athletic career, and I want to give God all the glory.”