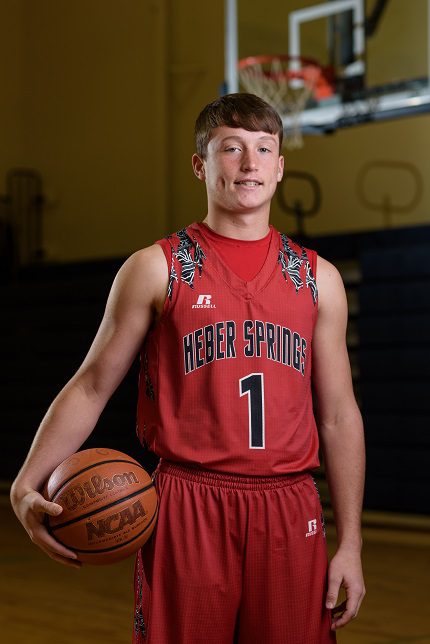 It’s the one game that every athlete circles on their calendar but no one wants to play — their final home game. On Friday, Jacob Bremmon will take home court for the final time in his basketball career at Heber Springs High School. A bittersweet moment for some, the senior welcomes the opportunity with open arms.


“Running out of the tunnel for the last time — it’s going to be exciting,” Bremmon said. “As a team, we’ve come a long way since the season began. For me, this game means a lot because I’m the only senior left on the team. I’m going to try to show out for my last home game.”


Bremmon was selected to this year’s 501 Basketball Team — 37 players representing the best the 501 has to offer both on and off the court.

The team is sponsored by Conway Ortho and Sports Medicine, Conway Regional Health System and First Security Bank. The senior was nominated by his head coach, Jay Moore.


“Jacob’s best qualities on the court are his effort, tenacity and his ability to lead by example,” Moore wrote in his nomination. “He is a great competitor with great passion who pushes others to be better and cares for his teammates.”


As Heber Springs’ only senior on senior night, Bremmon knows the team will be looking up to him to lead the Panthers (4-20, 3-11 Class 2-4A) to victory.


“Against Rose Bud, we need to focus on their shooters,” Bremmon said. “Our job will be to work on scoring inside and passing better. If we can cut down on turnovers and play our hardest, then we can win this game.”


In a year filled with ups and downs for Heber Springs, Bremmon focuses on the positives of his senior season.


“This year, I wanted to do something so that the team would remember me,” Bremmon said. “My goal was to commit myself to playing my hardest for them. As the only senior left on the team, I wanted to be a good role model for them. No matter what our record is, I always try to keep our energy up and make my teammates happy. Whether it’s making them laugh or distracting them from the negatives, my job is to keep my team pointed in the right direction.”


Bremmon’s top moment of the year? A big game against a tough opponent.


“This season, I scored 18 points in a game — the highlight of my career,” Bremmon said. “It was my first game after football season, and we were playing at Harding Academy. I had a bunch of steals, break-away layups, you name it. I was making everything. The energy was up, and it was really exciting. Although our team didn’t win, it was the most fun I’ve had on the basketball court in my career.”


Bremmon is no stranger to adversity. The senior has been overcoming personal challenges throughout his senior high career.


“In my sophomore year, I was in a bus wreck,” Bremmon said. “As a result, I didn’t play at all that year. Coming into my junior season, I knew that I had something to prove. I knew I wasn’t the best scorer, but I could play defense, get rebounds and out-hustle people. I had to stand out so that I could get playing time, and that’s exactly what I did.”


Off the court, Bremmon is involved with Beta Club and Fellowship of Christian Athletes at Heber Springs High School, pitches and plays outfield for Panthers baseball and recently signed to play football for Hendrix College.


“I’m really excited for the opportunity to continue playing football,” Bremmon said. “No matter what people say about you, go out there and prove them wrong. Have confidence in yourself. If you just focus and put energy into something, then you can obtain any goal you set for yourself.”


In his community, Bremmon gives back through SpeakLife, a nonprofit organization that focuses on the issue of bullying among children.


“In our town, there’s not a lot of things for our kids to do,” Bremmon said. “This is a way to help kids stay out of trouble. Most importantly, if someone feels bullied, they can come talk to us, and we can try to help them.”