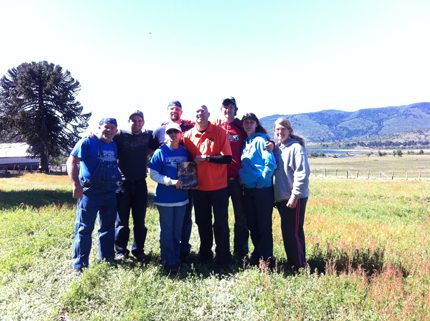 
In May 2004 when Pastor Russell Rhoden first came to preach at First Baptist Church of Center Ridge in Conway County, he thought he was just filling in until a new minister could be found.

However, the small group of about 16 parishioners who came that Sunday morning thought he was their new minister. When they found out he wasn’t, they asked him to stay. After praying for guidance, he did.


After eight years of growth and a regular Sunday worship service attendance between 160-180 people, Rhoden said the people of First Baptist Church thought it was time to give back to others by going on their first mission trip as a church.


“We felt that God was leading us to start on international mission trips in order to fulfill the command of the Great Commission in Matthew 28:19 and Acts 1:8,” Rhoden said.


The congregation looked into three options: Chile, Haiti and Russia.


“Chile was an overnight flight, had no tropical diseases and no poisonous snakes,” Rhoden said. “All you needed was a passport and a willingness to work.”


He went on an initial trip in the fall of 2011 and came in contact with the Mapuche people who are indigenous to southern Chile and Argentina. They live high in the Andes Mountains with little or no contact with the outside world.


“It was like stepping back in time,” Rhoden said.


Upon returning home, Rhoden met with members of his congregation. Twelve committed to go on a medical mission trip the next spring to Chile. Of the 12, four had medical experience. With a plan in hand, the church committed to raising the funds to send the 12 on the church’s first mission trip.


Even though the mission trip was supposed to be primarily a medical one, Rhoden said God simply had other plans. The missionaries provided medical check-ups and first aid kits to Mapuche families in several villages, but the group of missionaries thought they could do more to help.


Rhoden said the villagers had a hard time getting wood for their fires. They had to forage for the wood every day and just didn’t have enough. The missionaries found a few chain saws and axes in their base city and then traveled back to the mountains to simply cut wood wherever it was needed in addition to providing medical help. They cut around 100 ricks of wood in bad weather conditions for different families.


Besides exploring a better way to obtain firewood, the missionary group looked at the nutritional needs of the Mapuche people, who relied on nuts from native trees as one of their main food sources and livestock. His group noticed that even with fertile soil, the Mapuche didn’t grow gardens. They simply did not have access to plants that would grow well in a cool, short growing season.


The Center Ridge missionaries decided they could do the most good by teaching the Mapuche villagers to garden – which became the vision for the second mission trip. A team from the church would go back in late November 2012 to help the Mapuche people learn to garden and become more self-sufficient.


Rhoden said another missionary trip returned to Chile with a “hoe, rake and a shovel” to help teach sustainable gardening to the native Mapuches. He said his group could have taken tillers, but they didn’t want the villagers dependent on the machinery. During that trip, the missionary team started referring to the garden projects as “Seeds of Hope.”


During their 12-day stay, the missionaries from Center Ridge planted 14 gardens, built fences and constructed some greenhouses, all the while ministering to the spiritual needs of the people.


“It was our goal to show the Mapuche people love by helping them learn how to plant and protect their gardens, while sharing the love of Christ,” Rhoden said.


The church returned again in January to make sure the gardens were thriving. On this trip the missionaries also cut wood, hauled hay, built fences, handed out school supplies and continued to provide medical assistance.


During their three missionary trips to the area, several Mapuche families accepted Christ into their lives. Rhoden said these trips not only changed the villagers they came in contact with, but also have changed the lives of the 19 people who went on them.


“It changed us,” Rhoden said. “We got back and could see we have so much. So much we don’t need. The Mapuche people don’t have much, but they don’t waste anything.”


He said the trips have also changed the congregation as a whole.


“There is a willingness to work and get involved, not just in this, but locally, too.”


The “Seeds of Hope” that were planted grow not only in Chile, but thrive in the people of the First Baptist Church of Center Ridge.