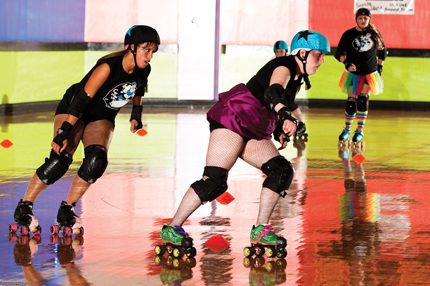 19 May Searcy Savage Sisterhood: Wheel warriors with a purpose

Britt “Rage” Ray, Amanda “Scargeant Major” Hitts and Jennifer “Smash-mouth Barbie” are not wrestlers vying for takedowns in the ring. Rather these women are pivots, jammers and blockers — wheel warriors battling for wins in a different venue, the roller rink.

They are members of Searcy’s women’s roller derby team, The Searcy Savage Sisterhood.

Thanks in part to the 2006 reality television show “Rollergirls” and the 2009 movie “Whip It,” there has been a recent resurgent interest in the sport that wowed fans in the 1950s and 60s with its sometimes staged hits and falls.

Based at Searcy’s Thrills on Wheels roller rink, where they practice for two hours two nights a week, the fledgling team is still finding its way in the roller derby world.

Team captain, Ray, says the team has plans to be a non-profit organization, rather than a business.

“We want to support our community by making our bouts fundraising events, instead of being a money-making company,” she said. “We want to emphasize the fun aspect of this sport.”

Those are future plans because the Savage Sisterhood has yet to have its first official bout. Some team members still need to pass their minimum skills test, an essential for official status with the Women’s Flat Track Derby Association, the international governing body for women’s flat track roller derby. A membership organization for leagues to collaborate and network, the WFTDA sets standards for rules, seasons and safety.

However, the Sisterhood has hosted its first fundraiser, an all-night dance/skate/costume party, where they collected canned food and donations for a local charity, His House.

To raise interest in the contact sport, they practiced on flat circuit tracks rather than the banked ones of earlier years, they also skated in the White County Fair Parade and the Searcy Christmas Parade.

Each team has five members on the track during a bout — three blockers, one pivot and one jammer. Teams may have as many as 14 members on the roster and must have at least nine to be recognized as official.

What’s up with these roller derby names?

According to the official website of the WFTDA, the nicknames are to help women who are “normal” during the day better embrace their “edgier” derby alter egos when they hit the track.

The Savage Sisterhood is looking for additional team members, who can be any age and from any occupation. Current members include the business manager of a local car dealership, a restaurant manager, a factory worker and several full-time moms. Interested women can contact them at [email protected] or via their Facebook page, facebook.com/savagesisterhood.