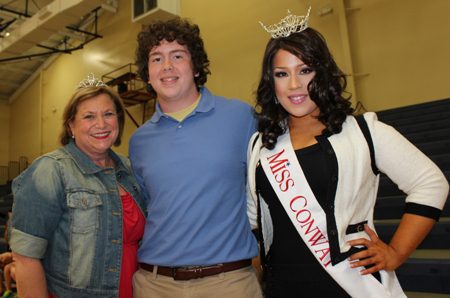 
Conway Christian School students and staff had a special surprise for gospel singing legend Sandi Patty during her recent tour on campus.

With homecoming festivities a couple weeks away, sophomore John Clay had campaigned for Patty to be named the school’s homecoming queen. Although she came in second, Clay presented Patty with her own crown during an assembly with students.


Patty was thrilled with the gesture. “I’m 50-ish and I have never been nominated for homecoming, prom or anything,” she said. “I became 16 again. It was so sweet.”


Patty toured the school on Thursday afternoon, the day of her concert at Central Baptist Church in Conway.


CCS seniors Will Henley and Andrea Howell, who have attended since preschool, were part of a group to greet Sandi when she arrived. Also on hand was Miss Conway Caitlyn Cook, who has been a fan of Patty since she was a young girl.


Patty toured the elementary and high school buildings, stopping in the elementary cafeteria where she was greeted with applause by the students and staff.


The high school choir also performed a song for Patty in preparation of its performance with her that night. Afterward, she posed for photos with the group and told students, “We’re going to have a great time.”


Patty told the students that her favorite music teacher was the one she had in elementary school. “Still to this day she’s had an impact on my life.” She also shared with the students that she was shy and turned to music. “I’ve always been singing,” she said. “I would find a song to help me speak my voice.”


As she left the choir room, students said, “We love you,” and she replied, “I love you too.”


As one of the most highly acclaimed performers of our time with five Grammy awards, four Billboard Music Awards, three platinum records, five gold records, and eleven million units sold, Sandi Patty is simply known as “The Voice.”


She is the most awarded female vocalist in contemporary Christian music history, with 40 Dove Awards. She was inducted into the Gospel Music Hall of Fame in 2004 and as an Indiana Living Legend in 2007. She has released more than 30 albums, including her latest Dove Award winning album, “The Edge of the Divine” (2010). Her debut full length symphonic pops album “Broadway Stories,” conducted by Maestro Jack Everly, was released on October 18, 2011.


While her 30-year career is heavily rooted in the gospel music industry, Sandi Patty has had the opportunity in more recent years to extend her career outside the genre. She has performed with symphonies across the country, including the New York Pops, Boston Pops, Cincinnati Pops, Dallas Symphony, Baltimore Symphony, Houston Symphony and the Oklahoma City Philharmonic.


In addition to her prolific musical career, Sandi is also an accomplished author. For the bestseller Broken on the Back Row, Sandi received the 2006 Silver Angel Award. Her other titles include Life in the Blender, Falling Forward, Layers and her latest book, The Edge of the Divine.


Sandi and her husband, Don, have eight children. They currently reside in Oklahoma City.