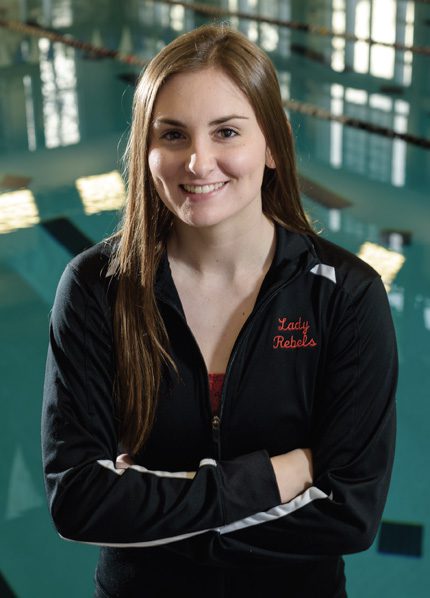 
Sacred Heart has just one swimmer on its high school swim team.


Bailey Roscoe, 17, a junior from Conway, is a two-time all-state swimmer for the Rebels and holds the 200 freestyle state championship for the Conway Aquakids. She trains with the Aquakids under coach Tony Marleneanu, who also serves as the Sacred Heart coach.

“She’s one of the top swimmers (on the Aquakids),” Marleneau said. “She’s won multiple medals at state, and she’s the fastest girls swimmer in the butterfly for the Aquakids.”


“She’s a hard worker,” Marleneau said. “She developed good technique through her training. She’s a good listener, and she can take advice and put it in her work. It’s her good technique that makes her fast. She is committed. She doesn’t miss any practices if she doesn’t have to.


“Swimming is one of those sports that if you put in the work, if you’re committed, if you listen to technique advice and put the mechanics in your work, you’re going to become a successful athlete.”


Roscoe grew up in a military family. Her father, Johnny, is retired from the Air Force. Her mother, Jennifer, is from Morrilton. Before retirement brought the family to the 501, they lived in nine different places.


“I came here in second grade when my dad deployed for a year, and we came back my eighth-grade year when I was 13,” Roscoe said.


Swimming was something she could take with her on every move.


Roscoe said she was hooked from the beginning.


“It’s like a stress reliever for me, just kind of like my place to go and get away from everything,” she said. “It’s just fun, and I love it.”


When she was 9 and the family lived in Virginia, she got started with swim lessons.


“It was a place that would see if you were ready to train for a swim team,” she said. “They told my mom she needed to get me on a team. Then we moved to New Jersey, then to Hawaii, then here.”


She is part of a 200 individual medley relay state record in Hawaii.


She’s in her third year with the Aquakids, and Marleneau said she was one of six who have qualified for USA Swimming sectionals in March.


She’s aiming to win a state title or two this year.


“She is probably the most self-disciplined person I know,” Jennifer Roscoe said. “Practice a lot of times is at 5 a.m. My rule was pretty much always, if I get up and look out in the living room, and if she was there, I’d take her to practice. If she wasn’t there, I’d go back to bed. If I have to jerk her out of bed, she’s doing it for me, not for herself.


“There was maybe only one or two times she was not in the living room. All swimmers are like that, very self-disciplined. They have to be.”


In addition, she lifts weights — alone — during her athletic period at Sacred Heart.


“I want to swim in college, and then really just take it as far as I can,” she said. “My immediate goal is a college scholarship.”


While coaches can’t contact potential recruits until midway through their junior year, Marleneanu said he expected Roscoe would draw plenty of interest.


“Oh, yes,” he said. “Her times are still improving. Henderson State and Oklahoma Christian are interested. She’s going to have to decide what she wants to study and find the best fit for her.”