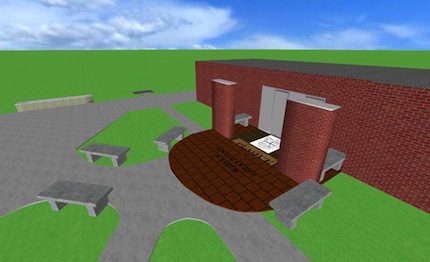 The current elementary building was constructed in 1956 and has remained largely unchanged since. During the last school year, the school’s development advisory board took on the fundraising project based on input from parents, faculty and parishioners. The building received a full facelift by replacing plastic blue panels and single-pane windows with brick, block and new windows. In addition, two classrooms received new floors and all six were outfitted with new cabinetry.


“It’s like I have a brand new start. It’s rejuvenating,” said fifth grade teacher John Taylor, who has been teaching at Sacred Heart since 1995. The elementary renovation project was fully-donor funded.


Refreshments, including brick-shaped cookies, were served. The brick cookies were in honor of the development advisory board’s new fundraising project, which was launched during the kickoff event. This school year, all donors who give at least $100 will have the opportunity to leave their permanent mark on the campus through a brick paver project called the Rebel Plaza.


The Plaza will be installed in front of the gym entrance – a very visible and highly trafficked area. As the Plaza is fully underwritten by project sponsors, every dollar received for pavers will directly benefit the school for tuition assistance and other operating needs. In addition to individual pavers, many families and graduating classes are pooling money to secure their spot on a larger paver on the Plaza.


The board also announced plans to renovate other spaces in the high school building. These include replacing the exterior wall of the cafeteria so that it coordinates with the new brick style on the elementary building, as well as installing new flooring. The women’s lobby bathroom and high school bathrooms will also receive significant updates.


The bathroom and cafeteria renovations will be an asset to the school, parish and the community, as Sacred Heart’s gym is used by numerous businesses and organizations in Conway County for events. In total, there are an estimated 12,000 “visits” (the cumulative number of people who visit the gym for ballgames, events, the bazaar, etc.) to the gym during the course of a year.  These projects are a part of a comprehensive improvement plan for the campus.


For more information about the Sacred Heart Catholic School Annual Campaign and how to reserve a spot on the Rebel Plaza, please contact the development office at 501.354.4358 or visit sacredheartmorrilton.org.