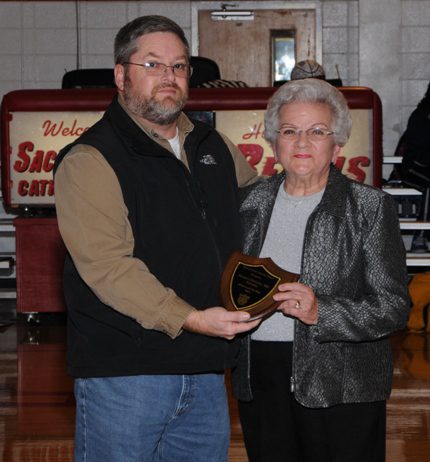 Sacred Heart recently announced the recipients of its 2014-2015 Alumnus and Honorary Alumnus of the Year awards. Both were recognized during the school’s homecoming ceremony.

This year’s recipient for the Alumnus of the Year Award is Delores DeSalvo Hartman.


Delores attended Catholic Point School in Center Ridge until her 10th grade year. She then enrolled at Sacred Heart because a Catholic education was of the utmost importance in her family. She graduated in 1958. Her family made many sacrifices to ensure that this was possible, instilling in her the value of Catholic education.


Through the years, Delores has served on the Sacred Heart School Board, endowment board and booster club. As the treasurer for the annual bazaar for more than 25 years, she has been a large part of its continued success year after year. She also completed the payroll for the school and did the bookkeeping for the cafeteria for several years.


Delores and her husband, Clem, spent many evenings working spaghetti dinners and other fundraisers to keep the school running. They ensured that their two sons both graduated from Sacred Heart and 45 years later she continues to volunteer to support the school.


This year, she established the Clem and Delores (DeSalvo, ’58) Hartman Teacher Appreciation Fund through the Sacred Heart Endowment to help recruit and retain quality teachers.


In addition to her commitment to Sacred Heart School and parish, she has been very involved in the community and has shown many people how meaningful it is to be a Sacred Heart graduate. Delores spent many years in the Morrilton business community before retiring from Regions Bank, having last served as vice president. She has been active in many community, church and civic organizations including St. Vincent Hospital Auxiliary, Conway County Fair Association, Conway County Legal Beverage Association, Sacred Heart Altar Society and Kiwanis Club.


In 2009, she was honored as the Morrilton Chamber of Commerce Citizen of the Year for her unending service to the community. She received the award of Kiwanian of the Year in 1995 and 2003 and was the first female president of the Morrilton Kiwanis Club in 1993 – 1994. She has also spent time volunteering for the March of Dimes Walk America and American Heart Association.

Rick, along with wife and alum Alma, has been a strong advocate for Sacred Heart school for many years. He began sitting in the stands at all the basketball, softball and baseball games when his children attended Sacred Heart and is an avid supporter of the athletic program. After several years as a baseball coach for the Morrilton Youth Association, he began volunteering as the Sacred Heart baseball coach in 1999. Rick teaches the players about the game of baseball, but he also teaches patience, teamwork and good sportsmanship. In 2007, the graduating class dedicated the yearbook to Rick.


Rick and Alma ensured that their three children graduated from Sacred Heart. They can now be found in the stands cheering for the high school teams as their son Aaron coaches, and at peewee games where grandson Gabe is learning the sport.