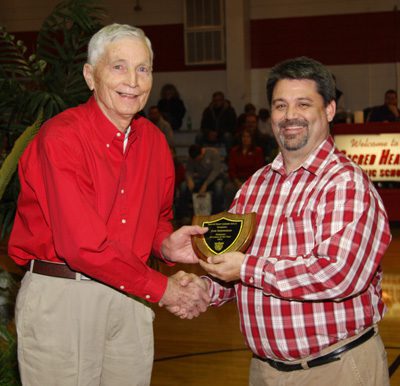 Sacred Heart Catholic School named the recipients of its 2011-2012 Alumnus and Honorary Alumnus of the Year awards during Friday’s homecoming festivities.


“Sacred Heart is very proud of our distinguished alumni, many whom have gone on to lead lives characterized by personal and professional success,” said principal Brian Bailey. “They make a difference both within our local community and around the globe. They are an inspiration and encouragement to our current and prospective students.”


This year’s recipient for the Alumnus of the Year is Denis Drilling, class of 1957.

A devoted supporter of Sacred Heart School and parish, Drilling’s involvement has included service on the school board and booster club as well as a strong leadership role in the annual school bazaar, which provides for a significant amount of the school’s budget every year. He and his wife, Dixie, host an annual Christmas dinner for Sacred Heart and, in 2011, he initiated and planned the school’s first Cajun Fête fundraising dinner.


Over the years, he devised numerous ways to generate funds for the school, including making knives to give as prizes in the bazaar country store booth, which he continues to operate annually.


Denis and Dixie ensured that their four children received a Catholic education and today, seven of their grandchildren have graduated or currently attend Sacred Heart. Denis and Dixie are actively involved with Sacred Heart parish, where he is an usher and has served on the parish council; he is also a long-time member of the Knights of Columbus.


“Denis is an excellent example of dedication to his alma mater, as his support has continued well after his own children graduated,” Bailey said. “It should also be recognized that in the Drilling family, one can expect a package deal as Denis’ wife, children and their spouses are also long-standing, reliable volunteers for all things Sacred Heart.


“Sacred Heart is proud to recognize Denis as this year’s Alumnus of the Year.”


“Most people who know Jack assume that he graduated from Sacred Heart. However, as was often the case, Jack had to leave school after the eighth grade in order to help support his family on the farm,” Bailey said. “That in mind, Jack and his wife, Irene, made many sacrifices over the years to send all 11 of their children to school at Sacred Heart.”


Jack has given his time to the school in various ways, including serving as president for both the school board and the booster club. A strong supporter of Rebel basketball, Jack remains a season ticket holder every year. He has worked the school’s annual bazaar for many years, both as dinner usher chairman and in the midway booths.


Beyond his work with the school, Jack is a 50-year member of the Knights of Columbus where he is a member of the Fourth degree and honor guard, served as Grand Knight and District Deputy, and is a past Knight of the Year.


In 1986, at a time when the school was in a financial bind, Jack and fellow Knight Herb Kordsmeier initiated bingo fundraising. The two borrowed money from parishioners and secured sponsors to purchase necessary equipment and, along with their wives, they helped raised more than $200,000 to support the school over the course of 16 years. The fundraiser continues to support the school today.


Jack, a lifelong member of Sacred Heart parish, is also actively involved with the church where he has served as a Eucharistic minister for 28 years. He is a long-time choir member and usher.


As stated in one of his nomination letters, “Jack (and Irene) are never showy or loud, but always present – in prayer, service, in celebration, ready to help and support.”