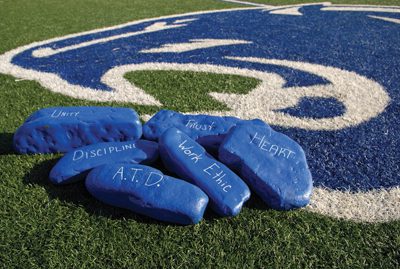 And what began as a team-building exercise during preseason camp seems to be turning into a cherished Panther tradition.

Tribble credits one of his assistants, Alan Buchanan, for the idea. During the summer retreat at Camp Caudle near Dover, the coaches talked to the team about characteristics needed to be successful. The Panthers chose Trust, Discipline, Attention to Detail, Unity, Heart and Work Ethic.

According to Tami Burcham, the Panthers’ Booster Club president, another part of the exercise was an illustration of filling a bucket with small rocks (“things you enjoy, things you want to spend your time on, not necessarily bad things, but things that aren’t crucial to the success of the team”), then trying to make the big rocks fit around the small ones.

They didn’t fit in the bucket.

But when the big rocks went in first, all the small ones fit by filling in the cracks in between. (“Big theme: take care of big things and little things take care of themselves.”)

The Panthers returned from camp with six big rocks — some weighing 25 to 35 pounds, Tribble said. They painted them blue and wrote the desired characteristics on them. They left them in the locker room and weight room during preseason workouts to remind themselves of what was important to the team.

“Then the kids decided they’d carry them with us to the sideline before the games, and they pick the person who is going to carry each rock who exemplifies that characteristic that week,” Tribble said. “They’re responsible. The rock-carriers go out with the captains and take the rocks to the sideline when the captains go out.”

The coaching staff never meant for the exercise to go public, but it didn’t take long once the rocks were brought to the sidelines.

“It’s been a good thing,” Tribble said. “I’m proud of the kids for picking worthy characteristics. It’s kind of caught on. The homecoming theme was ‘Panthers are Rock-Solid.’ One of the elementary schools did a little deal with it where they were doing adjectives and they painted adjectives on rocks describing the team, which they then presented to us.

“It’s caused some neat interaction with other people. It’s reminded people athletics can be used to teach important lessons. We’re proud of it and try to remind our team to exemplify those things. It’s been a good little rallying point, a focal point, during the year.”

The Panthers themselves continued to learn from the rocks.

“We were so good and close because our team theme was love,” said Hunter Winston, the Panthers’ senior running back. “That’s the strongest emotion, and anything can be accomplished with love. We always had each other’s backs on and off the field. It really gave us a good bond and was very important to me and our progress.

“I learned so much besides just football with this team, such as brotherhood and life situations. The coaches were like other dads and mentors, like great friends and not just coaches. I trust them and know I could give it my all every game because no matter what, they had mine and everyone’s back.”

Tribble said he never anticipated the metaphor taking off like it did.

“It was a neat activity,” he said. “We had them rank the characteristics, and the kids were arguing over which one should be first. But you never visualize it ending up in (the media) and on T-shirts.”

The Panthers lost 5A-West games to Siloam Springs and Greenwood but retained the conference’s No. 2 seed for the playoffs.

“It’s been a challenge every week, but the kids have really responded,” Tribble said. “We’re better in some ways than we were a year ago. I still think we’re still improving, and I still think we can play better than we’ve played.

“It has been a challenging year, but we’ve met the challenges pretty good. Our team was more mature and knew more what it took to win than we did going in a year ago.”

And even though the story of the rocks was born for 2010, it likely won’t end with the season.

“It’s something I’ve thought about, what will our points of emphasis be in the offseason?” Tribble said. “I’ve already thought about staying with those six characteristics, continuing to carry those rocks around. So it may stay around for a while. We’ll just have to see.”