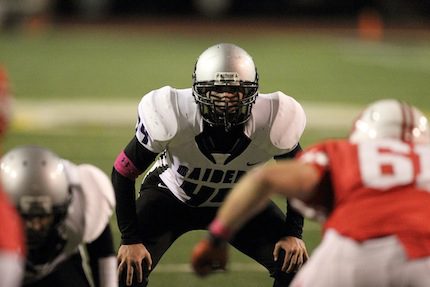 
Riverview’s success this year will be determined by their ability to remain consistent throughout the season. The Raiders opened conference play with a great win against Mayflower, 39-13, kicking off a 4-0 run to start 2-3A play.

“It was the best start for our year that we could have imagined against a really great team,” Coach Stuart Hill said. “We played really well on both sides of the ball.”

The Raiders lost their final three conference games, but a 4-3 record landed them in the playoffs where they lost in the first round to Greenland. This year, the Raiders look to make the style of play that started conference play in 2011 a trend for their entire season.

“We had times where we were really good with the ball last year, but we would like to step it up a bit on offense,” said Hill.


“On defense, we have some great linemen, but we ought to be faster,” Hill said. “We should be much better with the talent we have coming up this year. Offensively, we hope to be more consistent this year.”

Looking ahead at the season, Riverview knows who will prove to be the toughest competition. Their aim is to upset Harding Academy, who has controlled the No. 1 spot in the 2-3A conference in recent years.


“Ability wise, we all have an even battle for the playoff slots, but everyone is trying to knock Harding,” Hill said.