Things are looking up in Downtown Conway, and by all indications the sky is the limit.

“Downtown feels like a different place – modern, upscale and exciting but people who have lived here all their lives still think it feels like home,” said T.J. Johnston, director of the Conway Downtown Partnership, the group leading the revitalization efforts.

Things are looking up in Downtown Conway, and by all indications the sky is the limit.

“Downtown feels like a different place – modern, upscale and exciting but people who have lived here all their lives still think it feels like home,” said T.J. Johnston, director of the Conway Downtown Partnership, the group leading the revitalization efforts. 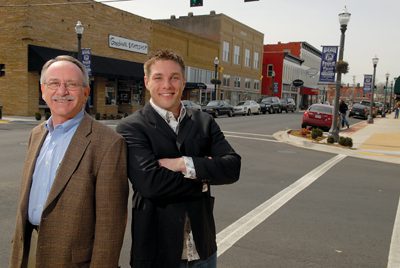 Founded in 2001, the Partnership is working to improve downtown in collaboration with other groups including the City of Conway and Conway Corp. A non-profit, economic development organization, the Partnership works to plan, promote and maintain downtown with the goal of a mixed use, urban environment.

“When the Partnership was formed, it was amazing the number of people still interested in downtown. It’s not just people in downtown. Others want it to be a viable downtown,” said George Covington, a lifelong resident of Conway and chairman of the Downtown Partnership. “We all agreed that we have to do something with it and not allow it to be boarded up.”

Early on the Downtown Partnership spearheaded a comprehensive, long-term development plan with the help of Sakal & Hood of Chicago, an architectural and urban design firm. The Conway City Council adopted the plan – Conway 2015: A Vision for Success. “I think we really hit a homerun with that,”
said Johnston.

The plan represented the first step in an energized and cohesive effort to improve downtown. It has provided the day-to-day blueprint for development and redevelopment in the city’s core, which many believe is a reflection of Conway’s strength as a community.

With a plan in place, Partnership members set about the work of revitalizing the area. “It’s been amazing,” said Covington.

Partnership members are “hands on” when it comes to downtown, according to Johnston, from what flowers to plant in the hanging pots to the location of light poles.

“It meant we were moving from visioning to implementation.”

New businesses and restaurants have sparked greater interest and activity in Downtown Conway, especially after 5 p.m. Covington also noted that there is more interest in living downtown, with apartments rented nearly as quickly as they become renovated and available. In fact, some have been leased before renovation work has been finished. “People really want to live downtown.”

“Downtown Conway is serving as a sense of place. It’s where you can take your family and friends, and be proud,” Johnston said.

Pleased with the progress in recent years, both men recognize there is still work to be done. “It will be interesting to see what the next few years bring in downtown,” Covington said.

In addition, several private developments are in the works – including the Satterfield Station and the $2.7 million renovation of the former Steel Chevrolet building – and public projects like the new building for the Conway Police Department.

“It’s good to see all of this public and private development in downtown,” said Johnston.

In fact, it is the mix of public and private funding for improvements that Johnston sees as the key to the success of Downtown Conway.

“There’s a lot of energy and momentum in downtown.”

In January, representatives of Sakal & Hood made a return visit to Conway to review the plan and progress that had been made.

“They were completely blown away with the success we’ve had. When you see what’s happened since 2001, it’s pretty mind-boggling,” Johnston said. “We were a lot closer (to the plan) than a lot of people expected.”

While they are pleased with the improvements, the Partnership would also like to see more living options in the future as well as retail shops.

“According to the national model, retail is usually the last to develop,” Johnston said, noting that some retail development – including the new location for Fletcher Smith Jewelers – has already occurred. “We’re definitely ahead of the curve on some of these issues.”

Covington – a third-generation Conway resident in his fourth term as chairman of the Partnership – has a unique perspective on the change that has taken place.

“When I was a kid, we lived on Front Street and we walked everywhere. Conway was a small, safe town with about 10,000,” he said. “I like what is going on in Downtown. Would you rather see it dead and boarded up? I’d rather it be alive and the heart of the community.”

Organizers are mindful of downtown’s past and heritage in their work, according to Johnston. For example, period lighting has been incorporated into the area’s infrastructure.

“We’re not forgetting the past. We’re embracing our history and looking ahead to a bright future for Downtown Conway.”