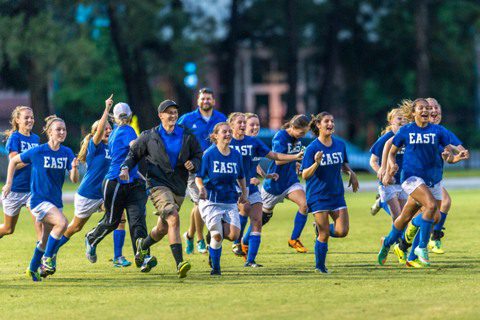 Nance was the head coach of the East girls basketball team for the Arkansas High School Coaches Association All-Star Week activities held at the University of Central Arkansas. Her father, John Hutchcraft, the long-time uber-successful coach at Guy-Perkins, has been an All-Star assistant several times but never a head coach.


Now his daughter is a winning head coach.


Nance’s East squad rolled over the West, 80-58, at the Farris Center last week.


“It was a great opportunity and honor to coach and get to know the student-athletes,” said Nance, who led the Conway Lady Cats to the Class 7A state championship in March with no seniors.


Consequently, she was coaching all new players during All-Star Week. Jordan Danberry, one of the Lady Cat stars as a junior, served as the East manager for the week.


Added Nance: “We spent a lot of time together in four days, and to share their last high school basketball experience with them was an honor. I was very pleased the way our team came out and competed. Our staff encouraged them to represent their school, conference, city and family and end their high school career with a win, and they did just that.”

Beebe’s Kalela Miller was named MVP of the game after a 25-point, five-rebound, three-steal performance. E-Stem’s Olivia McWilliams scored 12 points and was chosen the East’s Most Outstanding Player.


Conway’s Cade Jones was chosen Most Outstanding Player for the East baseball team, which split the doubleheader, winning 5-4 and then falling to the West, 7-6. Mayflower coach Joe Allbritton was head coach for the East; Bryant’s Kirk Bock led the West.


Allbritton was an assistant last year.


“That was pretty cool; I was pretty star-struck, but this year was a little different experience,” he said. “Being in charge, there’s more to do.”


He said he and his assistant coaches (Michael Wages of Marked Tree, Charles Brown of Armorel and Preston Despain of Brookland) couldn’t have picked a better group of players.


“They were fabulous, all ‘yes sir, no sir,’” Allbritton said. “I told them I knew it was for fun, and all I asked was that they hustle on and off the field, and they were great.”

Other results, with highlights from 501-area participants:


• Greenbrier’s Jack Lakey ended the boys soccer game with a penalty kick that gave his West squad a 1-0 win (5-3 PKs). Other 501-area athletes making those PKs included Evan Munro of Hot Springs Lakeside (MVP), Bryce Denker of Bryant and Logan Steed of Lake Hamilton for the West and Cabot’s Trevor Reed for the East. Cabot’s Steve Porter was head coach of the East; Bryant’s Brett Haugh led the West.


• Sylvan Hills’ Abigail Persson made the winning shot as the East girls soccer team prevailed, also on penalty kicks, 3-2. She was chosen the East’s Most Outstanding Player; Kendall Hollowell of Searcy was named MVP of the game. Little Rock Central’s Sheffield Duke was head coach of the East squad.


• North Little Rock’s Anton Beard earned MVP honors in the boys basketball game as he led the East to an 85-77 victory. Beard made five field goals and both of his free throws for 14 points, including nine in the second-half to lead the East’s rally from seven points down. Josh Bowling of Benton scored 21 for the West to lead all scorers and added three rebounds and two steals.