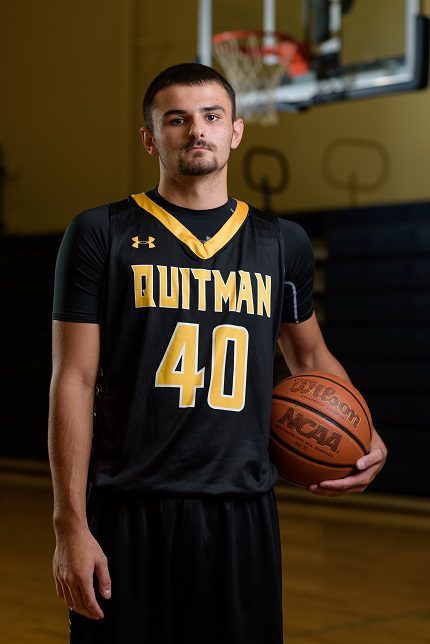 
When it comes to high school basketball, respect isn’t given — it’s earned. Off to their best season in many years, the Quitman Bulldogs (19-10, 4-2) are finally enjoying the spoils of victory and receiving the respect they deserve.  “Last year, we lost in the first round of the district tournament,” senior forward Hunter McClung said. “This year, everyone is playing their role, and we’ve bought in completely. The season is going well for us. Our biggest strength is that everyone is good at something, and no one wants to be the star. We have worked really hard all year to get to where we are right now, and our goal is to finish the season strong going into the district tournament.”


McClung was selected to this year’s 501 Basketball Team — 37 players representing the best the 501 has to offer both on and off the court. The team is sponsored by Conway Ortho and Sports Medicine, Conway Regional Health System and First Security Bank. The senior was nominated by his head coach, Brandon Burgener.


“Hunter is the hardest worker at all times, offensively and defensively,” Burgener wrote in his nomination. “He sets an example for our guys by the way he asserts himself defensively and gives up his body for loose balls. He has the respect of every player on our team and is a leader to us.”


Since signing up for peewee basketball in third grade, McClung has made many great memories during his time at Quitman.


“My favorite basketball memory is all the time I’ve spent making friends along the way,” McClung said. “I moved to Arkansas from Oklahoma in second grade. Being able to make friends and build relationships is what got me interested in the game in the first place. All of my teammates through the years have become family to me.”


“Hunter respects the game of basketball and plays it in its purest form, fundamentally,” Burgener wrote. “Teachers and students talk about how respectful and fun he is to be around. He has a great head on his shoulders, and he is a kid who has his priorities in the right place.”


As his love for the game grew, McClung studied professional basketball for inspiration and to improve his skills.


“When I started playing basketball for Quitman, I began following the NBA, too,” McClung said. “My favorite team is the Oklahoma City Thunder. I try to model my play after Steven Adams, their starting center. He doesn’t try to score every possession, but he tries to get every rebound and help out his team in other ways.”


“Hunter is a great teammate because he is selfless,” Burgener wrote. “If we win a game and he scores zero points and has zero rebounds or assists, he knows that whatever he did was good enough for the win, and it was someone else’s night. The respect he has from his teammates is high because they see his work ethic and try to best it. He makes us a better team by being present.”


This week, McClung and the Bulldogs look for payback after dropping a heartbreaker to Mount Vernon-Enola earlier this season — the team’s last loss.


“Last time, we came out slow against them,” McClung said. “It’s a game that we’re looking forward to so that we can right that wrong.”


Off the court, McClung runs cross country for Quitman, is involved in Beta Club and serves as student council secretary.


“Hunter is not just in class, he’s involved in class,” Burgener wrote. “He holds a 3.86 GPA and has an ACT score of 24. Hunter has a creative mind and is just as selfless in the classroom as he is on the court. He’s willing to lend a helping hand to anyone at any time. Hunter’s teachers brag on him, and his level of respect for them and his peers.”