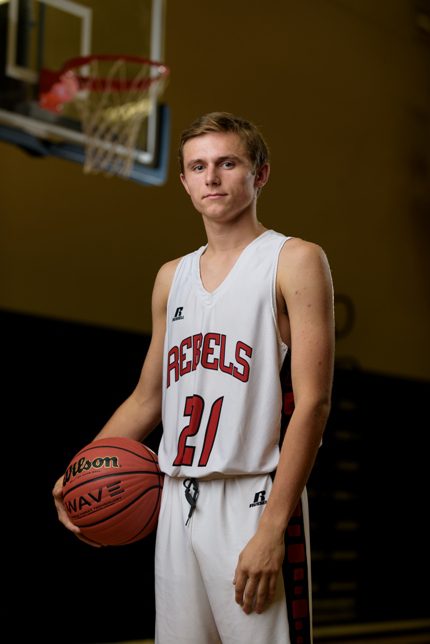 
Tyler Kersey has been around basketball most of his life. While the senior has made many great memories on the court over the years, the Sacred Heart point guard often recalls one pivotal moment in his career in which his teammates provided him with the encouragement to be victorious.


“Last year, against Wonderview, we were tied with less than a second to play,” Kersey said. “We designed a play for me to make a layup for the win, but I missed the shot. In overtime, I hit multiple three pointers to keep us in the game and send us to double overtime, where we ended up winning the game.”


That experience taught Kersey a valuable lesson — one that the senior still uses on the court today.


“I learned that your teammates are always there for you for the good and the bad,” Kersey said. “When I had missed my opportunity to make the game-winning shot, the crowd was hard on me — they yelled and they booed — but my teammates lifted me up when I needed them. That’s something I’ve always liked about Sacred Heart — our basketball team is like a fraternity and we’re all brothers to one another.”


Kersey was selected to this year’s 501 Basketball Team — 34 players representing the best the 501 has to offer both on and off the court. The senior was nominated by his head coach, Aaron Duvall. The team is sponsored by First Security Bank and First Service Bank.


“Tyler is very passionate about basketball and about his team,” Duvall wrote. “He is optimistic and uplifting, which makes him a great teammate. These types of leaders are few and far between. His calm and patient demeanor makes him perfect for our team captain role.”


With their share of ups and downs this season, Kersey says that teamwork and chemistry are as important as ever for the Rebels, who have set high goals for the second half of the season.


“Everything is starting to turn around for us right now,” Kersey said. “We’ve just hit a four-game winning streak and we’re starting to come around as a team. With huge conference rivalry games on the horizon, there’s a lot for us to play for right now.”


As team captain, Kersey believes the comradery he has with his teammates is the driving factor in his successful leadership on the floor.


“My teammates are my best friends,” Kersey said. “I have respect for everyone on my team and, in turn, I get their respect. We’re not the most talented team in the state, but our goal is to go out on the court each night and do better and try to outwork everyone we can. That’s how we’ve gotten a lot of wins this season, by simply outworking people.”


Off the court, Kersey plays baseball and golf and is involved with Beta Club, Key Club, Quiz Bowl and Student Council at Sacred Heart. In his free time, the senior attends Sacred Heart Church in Morrilton and enjoys hunting and fishing with friends.


“I think the same qualities that make Tyler a good teammate also make him a great classmate,” Duvall wrote. “He is a very generous person and is the kind of person who never meets a stranger. When he talks, people on the team and his peers in school listen to him. He has a great sense of humor and is a perfect fit for a leadership role.”


After high school, Kersey plans to major in business at the University of Arkansas.


“Tyler is a leader on the floor and in the classroom.” Duvall wrote. “His sense of humor and his willingness to help anyone who needs it are highly valued at Sacred Heart.  He also has a very strong character which leads him to be a fair competitor. He doesn’t take shortcuts or try to cheat, which is why he is successful.”