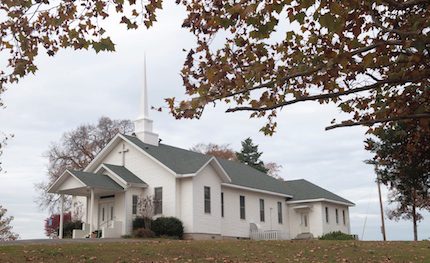 
Quitman United Methodist Church sits just off Highway 356 on one of the oldest continuously occupied Methodist worship sites in Arkansas. The original building was erected in 1881.

But the 60-member congregation is not dwelling on the past. In fact, it is undertaking a major renovation to update the 1926 building while “respecting the period” in which it was constructed, according to the Rev. Dave Caswell.


Quitman Male and Female College — one of Arkansas’ first colleges — constructed the first church building as a classroom and worship annex to Liberty Hall because the college had outgrown the three-story hall built in 1871. The annex cost the college $50,000, a princely sum in that day.


When the college closed in 1898, Liberty Hall became the Quitman Public School and served the school district until it burned in 1932. The church building became Quitman Methodist Episcopal Church.


The 1881 building was “blown away” in a tornado that hit Quitman in 1926, causing many deaths, and the present building was erected.


“The cornerstone of the original church is part of the present building,” Caswell said.


The church has not been renovated since 1967 and is badly in need of a facelift.


“The driving factor [for this renovation] was: Are we honoring God by taking care of his house of worship? That’s the question we asked,” Caswell said. “There’s no reason why God’s house can’t be the best in the community.”


The first step in answering that question was to survey the congregation to determine interest.


“I was curious about whether the congregation wanted to do this,” said Caswell. “The members were involved from the beginning. We went through all the planning steps to get where we are now.” This included obtaining approval from the Northeast District of the United Methodist Church.


“We have some excitement within the congregation,” Caswell said, in part because this small church boasts a youth group that numbers about 25, indicating that the church has a strong future.


The renovation will be done in two phases by contractor John Tutor and his son, who are not making a profit on the work. The Tutors have renovated two Baptist churches in the area, and word spread about the quality of their work, from Baptist to Baptist to Methodist.


Tutor said the renovation, while modernizing, will preserve the historic nature of the building with the use of stamped tin ceilings and bead board wainscoting inside and wrought iron outside.


Currently, the steps from the church begin immediately outside the double doors, which open inward. In phase one, a landing will be added to the exterior front, moving the steps outward. Wrought iron railings will flank the steps, and the doors will be switched to open outward. These changes will add safety and beauty to the exterior.


Inside, the narthex will be widened by removing a couple of walls, and a media control booth and two bathrooms, one on each side of the narthex, will be added. Currently, there is only one bathroom, in the back of the church. Ceramic tile floors in the bathrooms will help keep the 1920s-30s look, Tutor said.


“All the architects I’ve ever worked for . . . always want the enhancements to wow you, and that’s what I want to do here,” Tutor said.


The one exception to the period look is the use of Brazilian cherry for the narthex floor instead of the original pine or oak because it is a much harder wood.


The wall between the narthex and the sanctuary will be moved to allow the addition of a row of pews in the sanctuary. Caswell says the extra seating will benefit the church when it hosts the annual sixth grade graduation, as it has for six years, each year to a full house.


The first phase will cost $45,000, almost as much as it cost to build the original 1881 church. A major portion of that cost will pay for the new plumbing and a possible second septic tank if the new plumbing can’t be connected to the septic tank already in place. The new tank will tie into Quitman’s gray-water sewer system.


The congregation is already seeking ways to fund a second phase of the renovation. Estimated to cost $60,000, it will include a redesign of the sanctuary, complete with 14 new energy-efficient windows and plantation shutters, new carpeting, refinished pews, improved lighting, additional insulation and painting.