Searcy’s Chris Qualls represents everything you would want in an ideal kicker.

The senior is devoted to his craft and represents the Lions well on and off the field.


“He wants to be perfect in whatever it is that he is doing,” said Jeromy Poole, Searcy’s head coach. “I expect Chris to be a game changer.”


The senior kicker/punter was selected to this year’s 501 Football Team — 24 players representing all 11 counties of the 501. The team boasts the best the 501 has to offer both on and off the field. Qualls was nominated by Poole.


“He leads by example — never late, goes full speed in drills and has a great work ethic,” Poole wrote in his nomination. “Chris puts the time in to help his team be successful, and no ego!”


Qualls got started with football in the eighth grade, and he’s always been a Lion. He and his family moved to Arkansas from Auburn, Ala., in the fourth grade.


Qualls developed his kicking skills through his first love — soccer. But football eventually lured him.


“As a soccer player, I just eventually needed a little change, so I decided to try football,” Qualls said. “I played receiver for a little bit, but our team needed a kicker. So being in soccer, I kicked. It just took off.”


Qualls has excelled in his kicking duties for the Lions, particularly in one of the most difficult areas for a kicker — onside kicks. 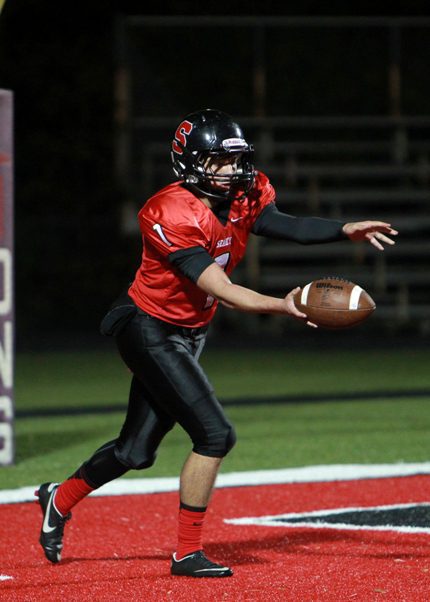 “Chris did all of our kicking and punting duties last year,” Poole said. “He helped us recover some very important onside kicks as well.”


“Then we threw a Hail Mary and won,” Qualls said. “It was a pretty crazy game.”


To the outside observer, an onside kick can look like a luck-of-the-draw type of play, but Qualls assures there is much strategy involved.


“I try to hit the top of the ball to make it bounce,” Qualls said. “I usually find the guy on the line that looks the most freaked out. Then we just all crash on him.”


Qualls hasn’t left his first love — he’s still a two-sport athlete with both soccer and football. In his spare time off the field, Qualls is a member of Downtown Church of Christ in Searcy and volunteers at the humane society, helping walk and wash dogs.


The Lions are 1-1 in non-conference play and travel to Morrilton on Friday. The Devil Dogs are the defending 5A champions, but have had a tough go to start the season and are 0-2. Qualls is keeping his approach to every game consistent and simple.